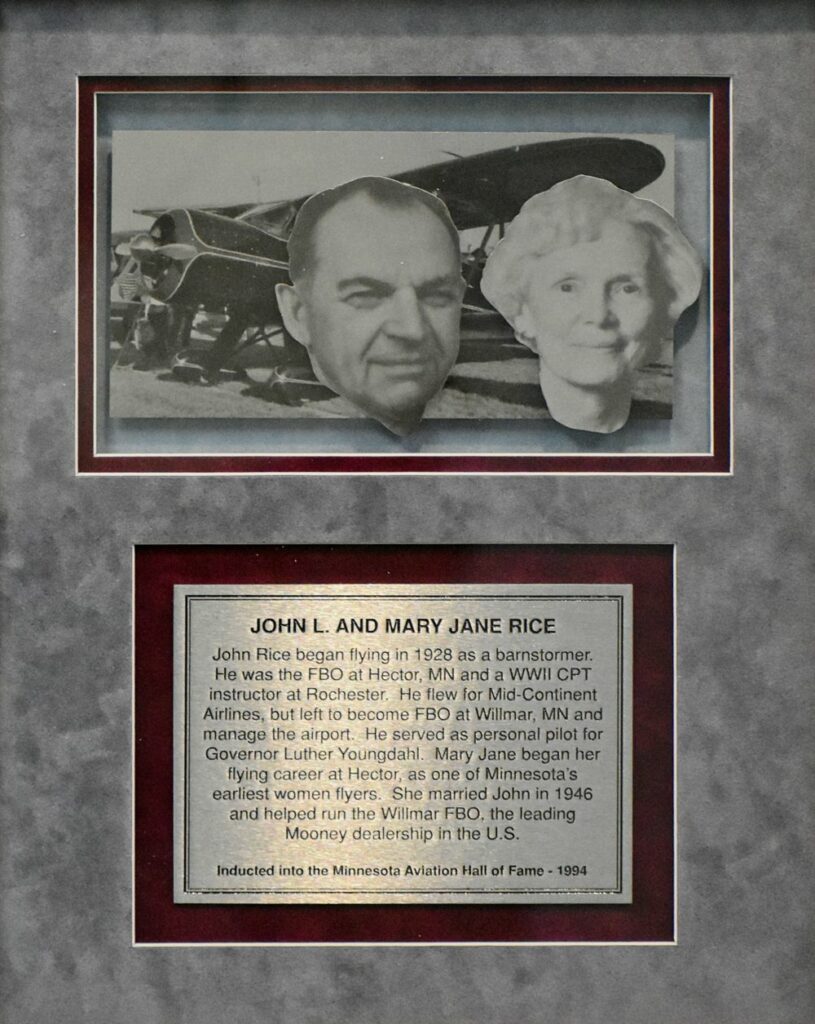 Mary Jane Leasman was born in Hector, Minnesota. She became interested in aviation in high school. She graduated in 1936 and began taking flying lessons the following year at Redwood Falls, MN. Jack Robinson was her instructor and they would fly from farm fields. She earned her Student License in 1938 and soloed soon after in a J-2 Cub. In 1939, Mary Jane was one of only five licensed women pilots in Minnesota. She heard that a chapter of an international organization for women pilots was forming. She joined immediately and became one of the first 99’s. In 1944, she gained a Commercial license, becoming the first woman to hold that certificate in Minnesota. When she attempted to join the WASP group, she was turned down as being too petite!

Mary Jane met pilot John Rice at Hector and flew with him in his Waco 10. She and John were married in 1946 after he had started Willmar Air Service at Willmar, MN. The business was incorporated in 1948 and Mary Jane inherited the job as company Secretary and Treasurer. Willmar Air Service originally sold and serviced Cessna aircraft. In 1956, they had the opportunity to become a Mooney distributor. They soon became the top-selling Mooney distributor in the country. When the Mooney company eliminated distributorships, they continued as Mooney Marketing Center, still selling and maintaining Mooney aircraft.

Mary Jane Rice maintained her role with Willmar Air Service for 63 years until the business was sold to their daughter and son-in-law, Janet and Bruce Jaeger. In 1964, she was named “Mrs. Minnesota Aviation” by the Minnesota Aviation Trades Association (MATA). She died in 2019 at the age of 100 years.