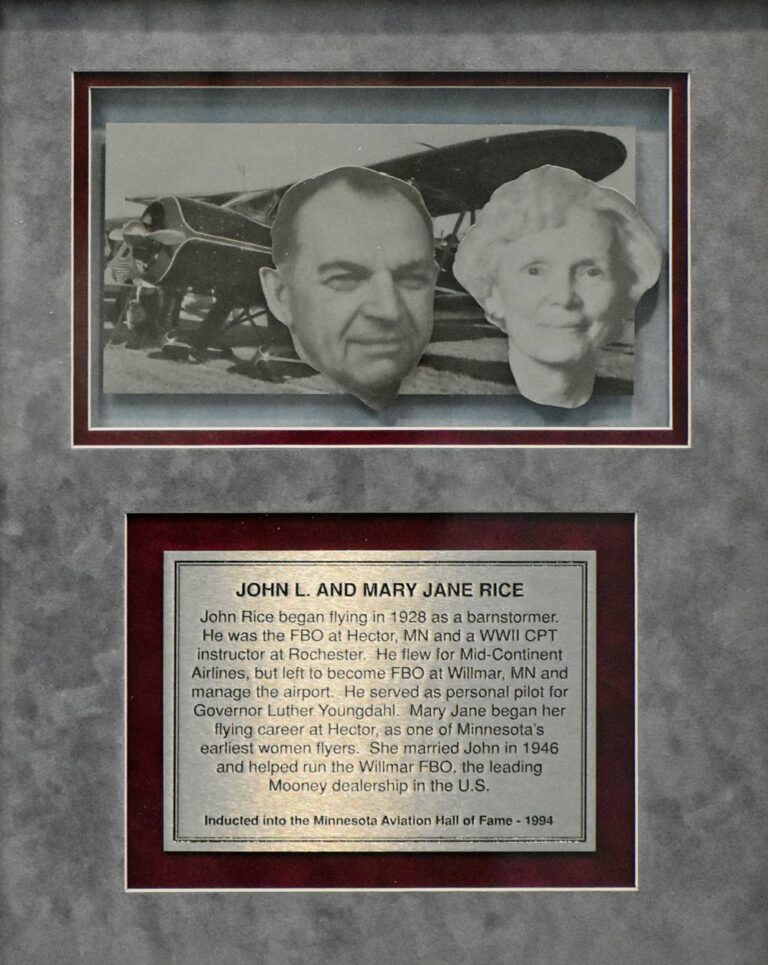 John Rice was born near Hector, MN. He began his aviation career in 1928 at the age of 17 with a ride in a Kinner Eaglerock. He soloed in 1937 and soon purchased a WACO 10 biplane, with which he barnstormed the Upper Midwest, based out of the Hector Airport. At the beginning of WWII, he taught in the CPT program at the Rochester, Grand Forks and Northport Airports. Rice was hired by Mid-Continent Airlines and flew for them in 1944-1945. After the war, he opened his own business, Willmar Air Service, at the Willmar Airport. In 1946, Rice married respected woman aviator, Mary Jane Leasman and the two would spend the rest of their lives working in the general aviation field. One of Rice's duties at the operation was as a crop-duster. In 1949, his spray plane caught a wing on trees and he cartwheeled into the ground. Three crushed vertebra left him paralyzed from the waist down. Through hard work, he regained his pilot's license the following year.

Rice gave seaplane instruction, and flew as regular pilot for Governor Luther Youngdahl. He was licensed by the FAA as a license examiner for 36 years. He also became the regional distributor of Mooney Aircraft and earned numerous awards over the years for selling the most Mooney aircraft of any licensed distributor. Rice helped organize the Minnesota Chapter of the OX-5 Club of America, an organization of pilots who had flown behind the famous Curtiss OX-5 engine before WWII. In his spare time. Rice also restored vintage aircraft, including a Pitts, a Fairchild 24, a WACO UPF-7 and a rare WACO HRE. The Willmar Airport is named in his honor, Willmar Municipal Airport-John Rice Field. Rice was one Sherm Booen’s backers for the creation of the Minnesota Flyer Magazine. Rice was honored by the Flying Farmers organization as “Airport Operator of the Year” in the early 1960s.