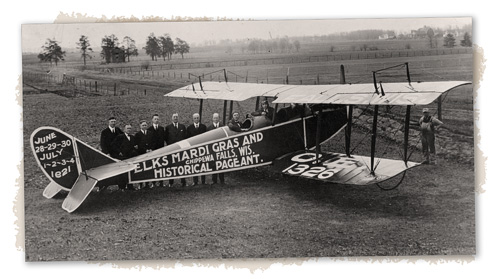 About Minnesota Aviation Hall of Fame

The Minnesota Aviation Hall of Fame is a nonprofit Minnesota corporation, recognized by the State of Minnesota as a means of honoring its pioneer and historic aviation persons in a lasting and significant way. It is a vehicle for putting their names and careers before the public so that citizens of Minnesota may become familiar with the contributions made by those who helped promote the healthy aviation climate we are so proud of today.

Purpose: To collect and maintain a biographical file on each Minnesota aviation personality from the earliest flyers and businessmen and women forward in time to those who made major contributions to postwar and current aviation. Such files include interview tapes, photos from individual collections, memorabilia and archival material such as scrapbooks, log books, papers, news clippings, ect.

Activities: Each year, the Hall of Fame Selection Panel meets to consider new candidates for induction into the Hall. Selections are made from nominations sent in by the public, and candidates determined by the panel's research. Approximately six inductees are chosen each year and the inductees are then installed at a ceremony in the spring of the following year.

The Minnesota Aviation Hall of Fame is sincerely appreciative of the financial support provided by grants and donations from individuals.

The Minnesota Aviation Hall of Fame honors an individual for the Best Aviation Writing by a Minnesotan for the Year. The writing award is given each year for a published work in the hopes of encouraging aviation writing and editorializing that enhance the positive aspect of aviation.

The Minnesota Aviation Hall of Fame is proud to acknowledge one of Minnesota's fine aviation artists with an award each year at the annual Induction Banquet. The award was begun in 2005 and encourages Minnesota aviation artists to portray aviation in a fine arts forum.

The Hall of Fame is also proud to sponsor a flying scholarship for a young student pilot, recognizing the responsibility to provide an educational opportunity for the generation of the future.

In subsequent years, the Hall of Fame was incorporated and began a series of annual induction ceremonies to honor the inductees. Each spring since 1989, the banquet has been attended by members of the Minnesota aviation community along with the inductees' families and supporters.

As a companion the Minnesota Aviation Hall of Fame, the Minnesota aviation history book is available. The book describes in brief form, the careers of over 350 of Minnesota's pioneer aviation personalities, in addition to providing a wealth of information about flying in the earliest years.

The aviation fraternity in Minnesota, and indeed, the nation, owes a lot to the pioneer pilots, engineers, mechanics and entrepreneurs that people the colorful history of flying in the North Star State.

In this book, you can journey through the multitude of endeavors that the early flyers and their mentors experienced. Take off on a barnstorming ride with an itinerant free-spirited young aviator, travel by air from state to state over the mountains in a 1930s airliner, feel the intensity of interest as a world reacts to a young Minnesotan’s flight across the ocean to Paris, and witness the frantic activity that followed the declaration of war heralding WWII. Whether you embrace the collection of anecdotes about real heroes of the period, or need a solid sourcebook for periodic reference, the book’s 288 pages are sure to capture your interest.

Written by historians Noel Allard and Gerald Sandvick, the 9” x 11-1/4” hardcover book includes major biographies of Walter Bullock, Clarence Hinck and Speed Holman plus thumbnails of more than 350 other important Minnesota aviation persons. Chapters are arranged chronologically within category beginning with the balloon flights of the late 19th century and follows with chapters on the pioneering years, including the Great War; the barnstorming era between the wars; the record setters; women pioneers; aeronautical engineers; and the Minnesota-Alaska connection. Next comes the story of the inventors, designers and homebuilders, the State’s early airports, the beginning of the airlines, the early air mail, and air commerce. The story turns to the military connection, the story of the early Air Guard, the Naval Air Station, the CPT and WTS, and all the contributions Minnesota made to the war effort such as modifying the Doolittle Raiders, glider manufacturing, propeller manufacturing, the Motorless Flight Program, the Mod Center, Minneapolis Honeywell and the autopilot, Minnesota WWII Aces, and the beginning of the Civil Air Patrol. The book illuminates the creation of MN/DOT and the MAC.

This is a book that you can open and begin reading anywhere, put back on the shelf and pull for reference in the future. Illustrated with over 250 photos and numerous drawings, it will warm your heart and leave you in awe of what Minnesotan’s have accomplished.

The Minnesota Aviation History book is available here on line:

Or buy it by regular mail.