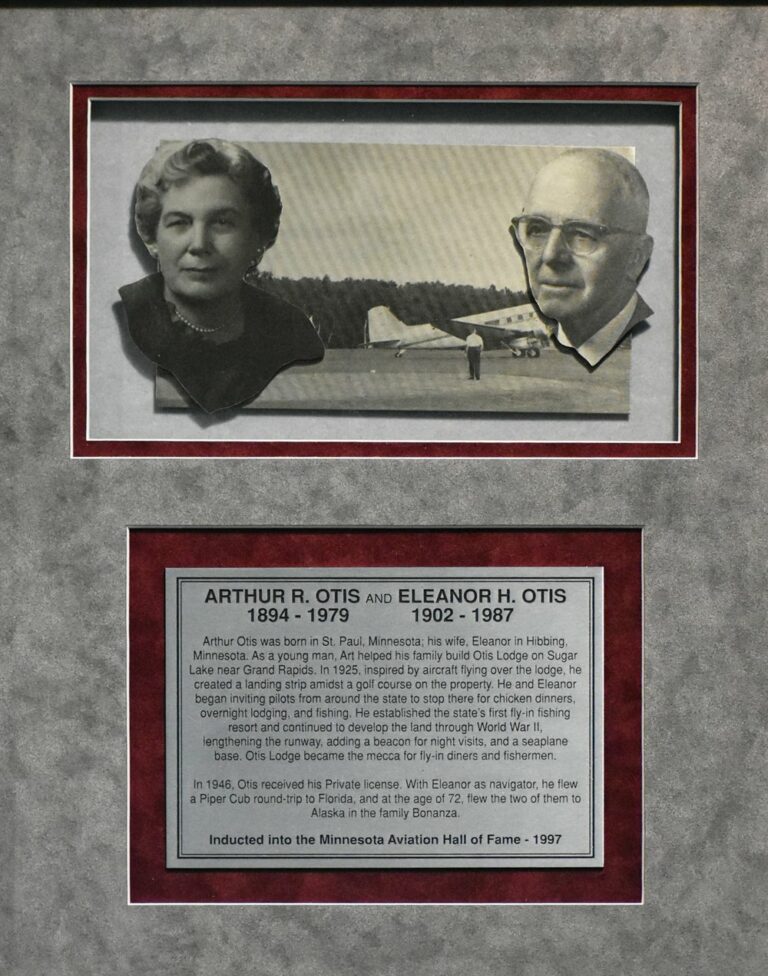 Eleanor Otis was born in May of 1902 in Hibbing, Minnesota. She attended schools there and in Coleraine and Grand Rapids. She earned a teaching certificate from Bemidji Normal School in 1921 and began teaching at the very small Lake Sissabakwet (Sugar Lake) country school that Fall. She roomed with the Otis family who were farming nearby. In 1923, she married Arthur Otis, and soon the two began to develop a lodge on the property which would become a popular fly-in resort.

Eleanor was the master of the lodge kitchen, as well as the actual manager of the lodge, taking charge of hiring and training of the staff, bookkeeping and supply procurement. In 1933, she initiated the offer of free chicken dinners to any pilot landing at the original 1300 foot airstrip on the property. Those dinners became famous in the flying community. The resort became the go-to place for flying fishing trips and hosted many fly-ins. Northwest Airlines VP, Fiske Marshall landed on the strip in a DC-3, The Air National Guard was also known to visit and often P-51s would be parked by the runway.

Eleanor also became Art Otis' aerial navigator as the couple began taking flying trips around the state in a Piper Cub. Later, venturing farther around the country in the couple's Bonanza aircraft, she took aerial pictures which she used in giving travelogue talks to various groups. She was honored with the title of “Mrs. Aviation of the Year” by the Minnesota Aviation Trades Association in 1964. She published an autobiography in 1985 and authored cookbooks and booklets advertising the lodge. Eleanor passed on in 1987.