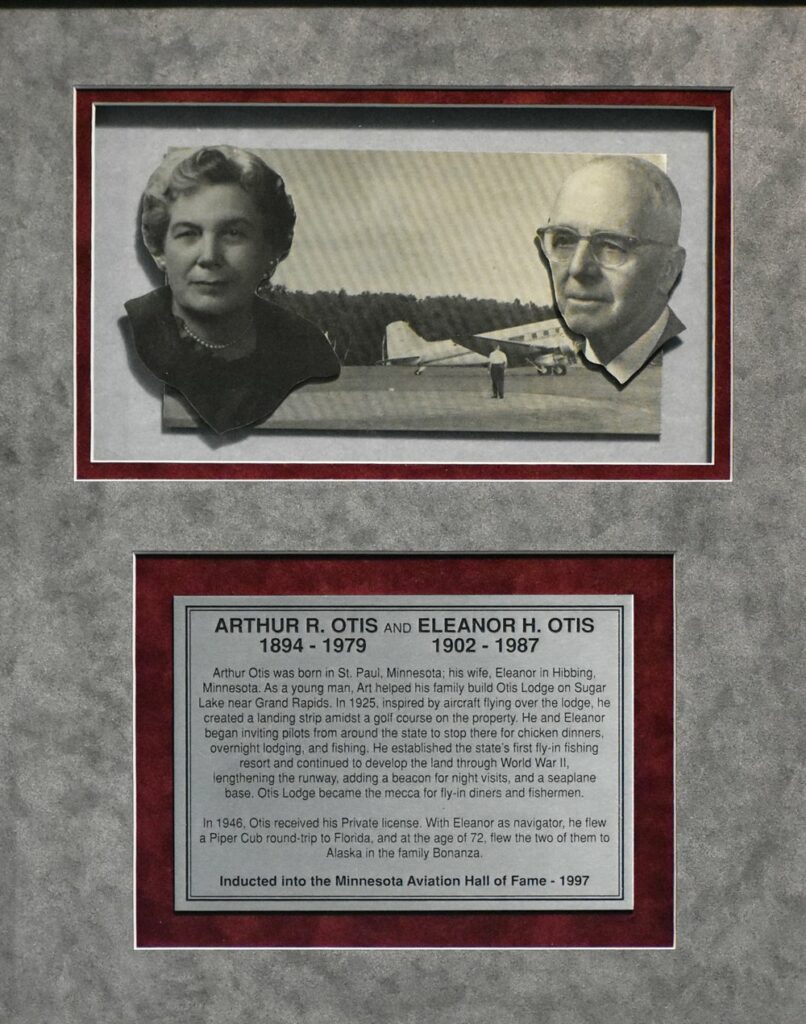 Arthur Otis was born in St. Paul, Minnesota, in 1894. He attended schools in St. Paul, St. James and Mankato. As a young man, he camped with his family on the shores of Lake Sissebakwet, near Grand Rapids, MN. His father died when he was 16 and Arthur persuaded the family to homestead on the lake property. They built a house and began farming. Arthur and his mother bought additional property and turned the home into a lodge, with an attached golf course. Arthur married and he and his wife, Eleanor ran the lodge on Sissabakwet (Sugar Lake to the locals). It became very popular as the lake was a great fishing spot. In 1925, when two Ford Trimotors, flying cross-country on the National Air Tour, flew over the property, Otis was inspired. He began to cut out trees to clear a landing strip, convinced the county to move a road that crossed it, added sixteen cabins, installed an old airport beacon tower to enhance night operations, and invited pilots from around the state to stop in, offering free chicken dinners. It didn’t take long before the word got around about the lodge and Eleanor Otis’ fried chicken and the lodge became a mecca for fly-in fishermen. Later, Otis added a seaplane base on the lake off the end of the property.

In 1937, the airport was dedicated and planes began to arrive regularly. In 1940, Northwest Airlines’ Vice-President, Fiske Marshall, visited, flown in on a Northwest DC-3. The local Air Guard flew in often and the airstrip occasionally had P-51s parked along the runway. In 1964, Otis sold the lodge, but kept flying. At age 72, he and Eleanor, took his Bonanza aircraft on vacation to Alaska. Art Otis died in October, 1979. The beacon tower is currently at the Air Guard Museum and the restaurant is still open on Sugar Lake.