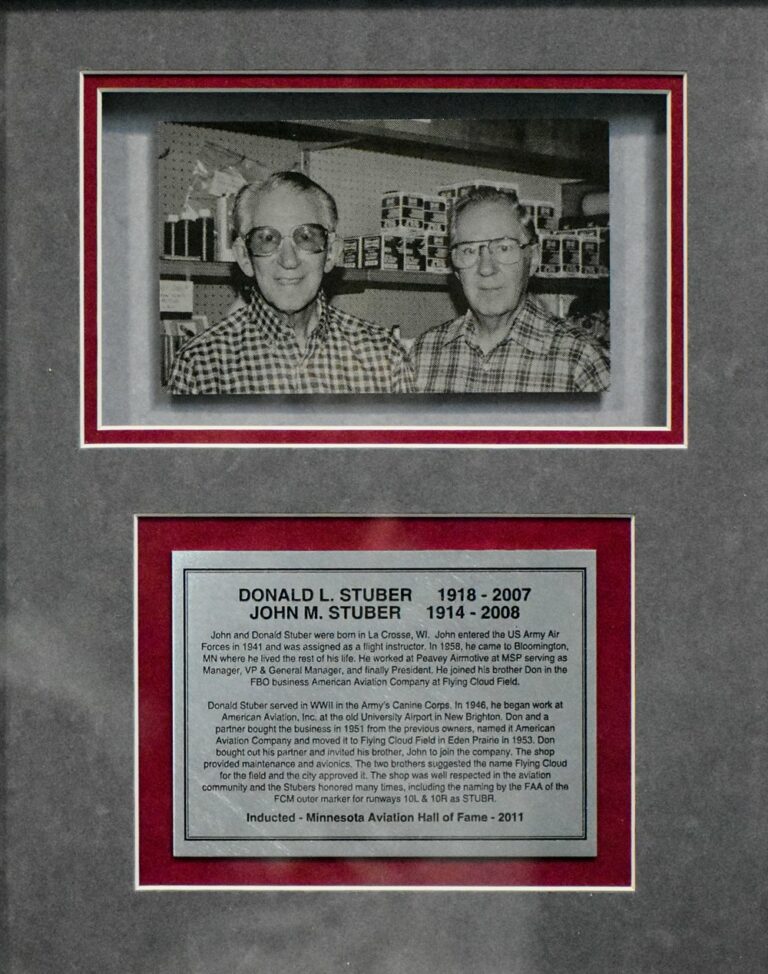 Donald Stuber was born in La Crosse, WI. He served in WWII in the Army’s Canine Corps as a dog trainer. On discharge from the service in 1946, he began work at American Aviation, Inc. then located at the old University Airport in New Brighton. The company sold airplanes and gave flight instruction. They had also purchased land in Eden Prairie formerly used as a WWII practice field for Navy flight cadets from Wold-Chamberlain Field in Minneapolis. In 1951 the field was little more than a cow pasture with but one or two airplanes tied down there. Don and Harold Worcester bought American Aviation and moved it to Flying Cloud in 1953.

Don invited his brother, John to join the business after Don’s partner left to open business elsewhere. The two brothers lobbied for naming the field Flying Cloud and it stuck. The brothers were able to get improvements made at the field and have it assumed by the Metropolitan Airports Commission in 1948. In 1949, the flight school business was sold to Gregg Nelson and Ray Ryan, who formed Nelson-Ryan Flight Service. American Aviation continued business on the field rebuilding and installing instruments, such as VOR (Omni), DME, Transponders, ADF, R-nav and Loran. The brothers brought the first aviation radios into the field of general aviation. American Aviation was also a resource for old parts and somehow could always find something a rebuilder or restorer needed. The brothers were loved and respected in the aviation community and honored many times, including the naming by the FAA of the Flying Cloud outer marker for runway 9R as STUBR.

Honored many times for their contribution to aviation in the Twin Cities, Don and his brother, John were the major players in the early development of Flying Cloud Airport.