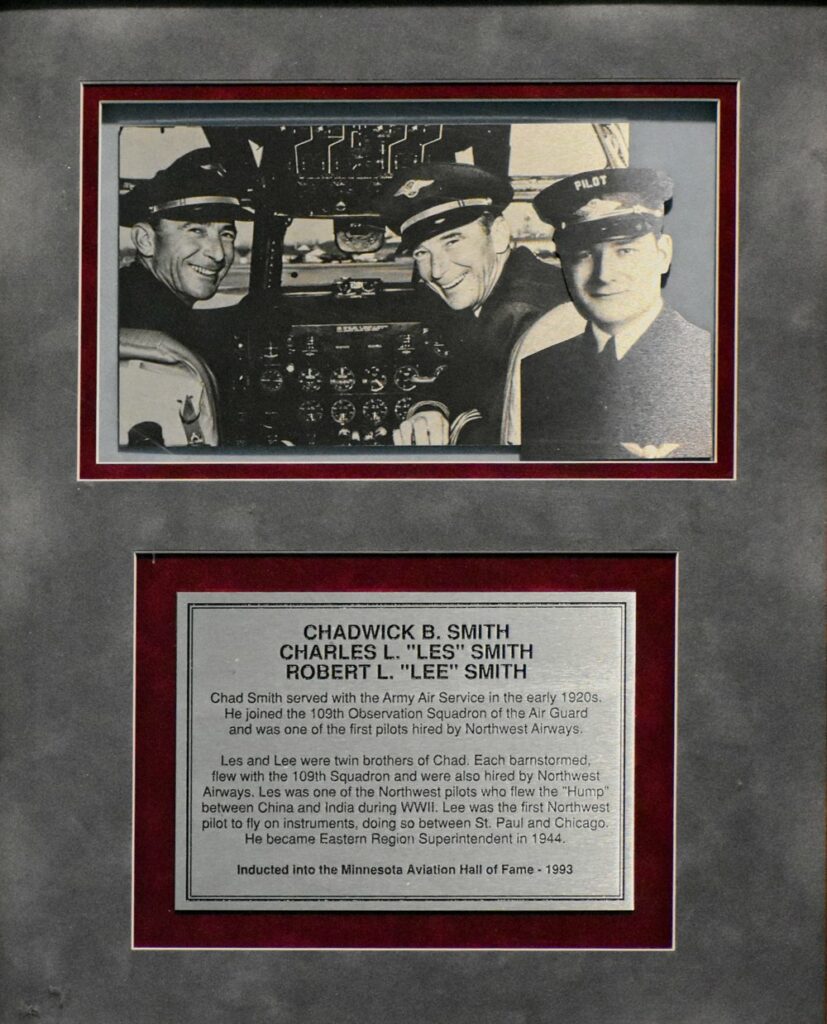 Charles (Les) Smith was born in Primghar, Iowa. In 1924, he took his first airplane ride at Robbinsdale Airport in Minneapolis, in a J-1 Standard piloted by Walter Bullock. He soloed in 1927 in a Jenny and earned his Private License in 1929. Les Smith joined Midwest Air Transport and went on a tour from Minneapolis to Madison, WI, during which he gave sight-seeing rides and flight lessons. In Madison, Les met his wife with whom he enjoyed 56 years of marriage until her death. During the Depression, work thinned out, the group disbanded and Smith returned to Minneapolis.

Les Smith was the twelfth pilot hired by Northwest Airways in 1930 and flew with them for 33 years. Smith’s older brother, Chad had been hired in 1927, his twin brother, Lee, hired in 1929. He began his career flying an open-cockpit Waco aircraft, taking mail between Minneapolis and Chicago. Aviation ran in the family; Les’ sister, Gladys Roy became well-known as a wing-walker and parachutist. Les Smith’s career went from flying open-cockpit Waco mailplanes to the Boeing 707 jetliner. . Les was a charter member of the ALPA (Air Line Pilots Association), and fought for safety procedures and benefits for flight crews.

Smith had also joined the 109th Minnesota Air Guard, where he served from 1933 to 1937. While in the 109th, he had to make an emergency parachute jump from a disabled O 38 observation aircraft. During WWII, Les flight-tested B-24 bombers after modifications at Holman field. He also checked out their military flight crews. In April, 1943, Les was one of 15 Northwest Airlines pilots assigned to the Air Transport Command who flew C-46 aircraft from the US to Karachi, India with war supplies. The 5,000 mile trip took weeks. Smith also raised and trained horses as a hobby.