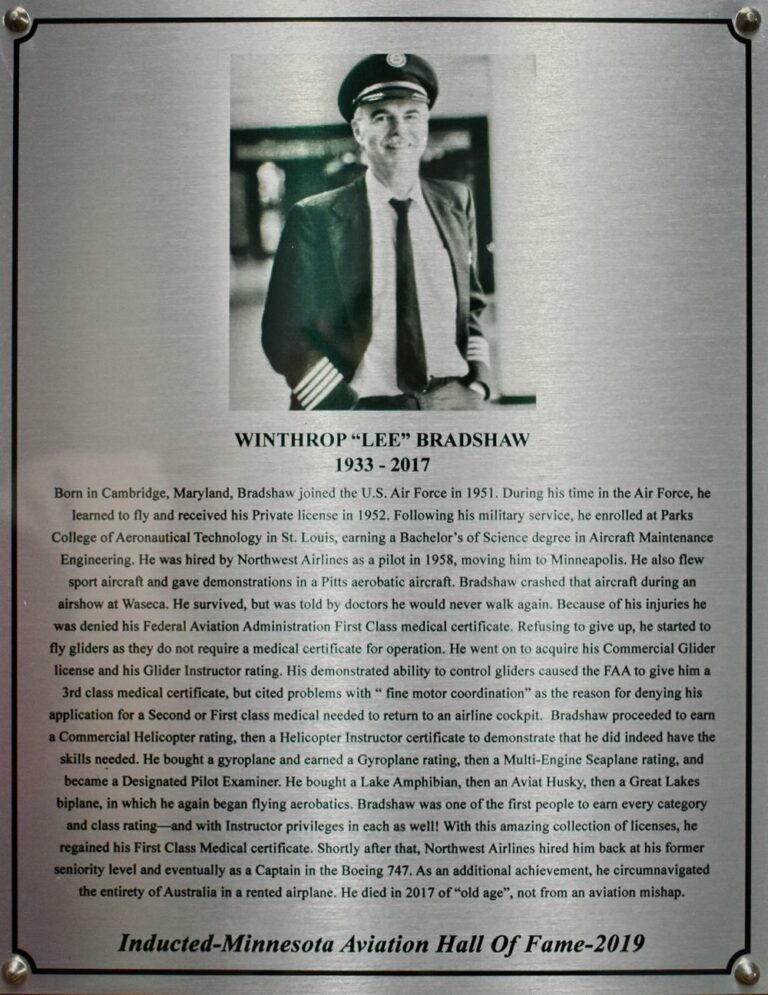 Born in Cambridge, Maryland, Bradshaw joined the U.S. Air Force in 1951. During his time in the Air Force, he learned to fly and received his Private license in 1952. Following his military service, he enrolled at Parks College of Aeronautical Technology in St. Louis, earning a Bachelor of Science degree in Aircraft Maintenance Engineering. He was hired by Northwest Airlines as a pilot in 1958, moving him to Minneapolis. He also flew sport aircraft and gave demonstrations in a Pitts aerobatic aircraft. Bradshaw crashed that aircraft during an airshow at Waseca. He survived, but was told by doctors that he would never walk again. Because of his injuries, he was denied his Federal Aviation Administration First Class medical certificate. Refusing to give up, he started flying gliders as they do not require a medical certificate for operation. He went on to acquire his Commercial Glider license and his Glider Instructor rating. His demonstrated ability to control gliders caused the FAA to give him a Third Class medical certificate, but cited problems with “fine motor coordination” as the reason for denying his application for a Second or First class medical needed to return to an airline cockpit. Bradshaw proceeded to earn a Commercial Helicopter rating, then a Helicopter Instructor certificate to demonstrate that he did indeed have the skills needed. He bought a gyroplane and earned a Gyroplane rating, then a Multi-Engine Seaplane rating, and became a Designated Pilot Examiner. He bought a Lake Amphibian, the an Aviat Husky then a Great Lakes biplane, in which he began flying aerobatics. Bradshaw was one of the first people to earn every category and class rating – and with Instructor privileges in each as well. With this amazing collection of licenses, he regained his First Class medical certificate. Shortly after that, Northwest Airlines hired him back at his former seniority level and eventually as a Captain on the Boeing 747. As an additional achievement, he circumnavigated the entirety of Australia in a rented airplane.