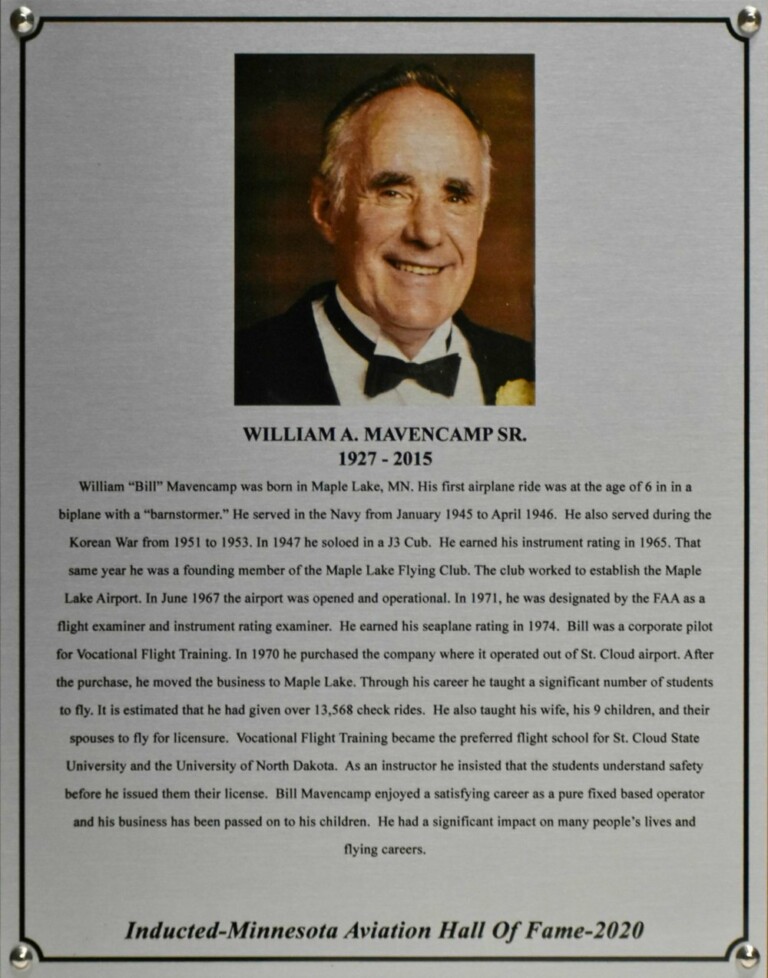 William “Bill” Mavencamp was born in Maple Lake, MN. His first airplane ride was at the age of 6 in in a biplane with a “barnstormer.” He served in the Navy from January 1945 to April 1946. He also served during the Korean War from 1951 to 1953. In 1947 he soloed in a J3 Cub. He earned his instrument rating in 1965. That same year he was a founding member of the Maple Lake Flying Club. The club worked to establish the Maple Lake Airport. In June 1967 the airport was opened and operational. In 1971, he was designated by the FAA as a flight examiner and instrument rating examiner. He earned his seaplane rating in 1974. Bill was a corporate pilot for Vocational Flight Training. In 1970 he purchased the company where it operated out of St. Cloud airport. After the purchase, he moved the business to Maple Lake. Through his career he taught a significant number of students to fly. It is estimated that he had given over 13,568 check rides. He also taught his wife, his 9 children, and their spouses to fly for licensure. Vocational Flight Training became the preferred flight school for St. Cloud State University and the University of North Dakota. As an instructor he insisted that the students understand safety before he issued them their license. Bill Mavencamp enjoyed a satisfying career as a pure fixed based operator and his business has been passed on to his children. He had a significant impact on many people’s lives and flying careers.