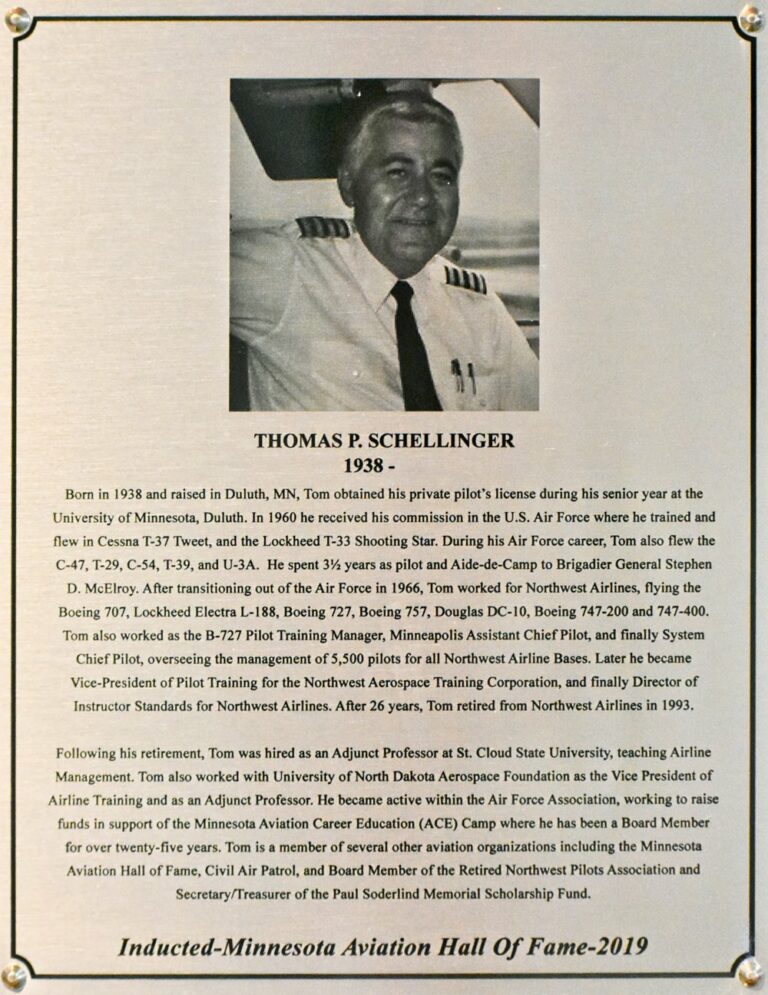 Born and raised in Duluth, Minnesota, Tom obtained his Private license during his senior year at the University of Minnesota, Duluth. In 1960, he received his commission in the U.S. Air Force, where he trained in the Cessna T-37 Tweet, and the Lockheed T-33. During his Air Force career, Tom also flew the C-47, T-29, C-54, T-39, and U-3A aircraft. He spent three and a half years as pilot and Aide-de-Camp to Brigadier General Stephen D. McElroy. After transitioning out of the Air Force in 1966, Tom worked for Northwest Airlines, flying the Boeing 707, Lockheed L-188 Electra, Boeing 727, Boeing 757, Douglas DC-10, and the Boeing 747-200 and -400 models. Schellinger also served as the 727 Pilot Training Manager, Minneapolis Assistant Chief Pilot, and then Chief Pilot, overseeing the management of 5500 pilots for all Northwest Airlines Bases. Later he became Vice-President of Pilot Training for the Northwest Aerospace Training Corporation, and finally Director of Instructor Standards for Northwest. He retired from Northwest in 1993 after 26 years service.

Following his retirement, Tom was hired as an Adjunct Professor at St. Cloud State University, teaching Airline Management. Tom also worked with the University of North Dakota Aerospace Foundation as Vice-President of Airline Training and as an Adjunct Professor. He became active again within the Air Force Association, helping raise funds to support the Minnesota Aviation Career Education (ACE) Camp, where he has been a Board Member for over 25 years. Tom is also a Board Member of the Minnesota Aviation Hall of Fame, the Civil Air Patrol, and the RENPA (Retired Northwest Pilots Association.) He was also Secretary/Treasurer of the Paul Soderlind Memorial Scholarship Fund.