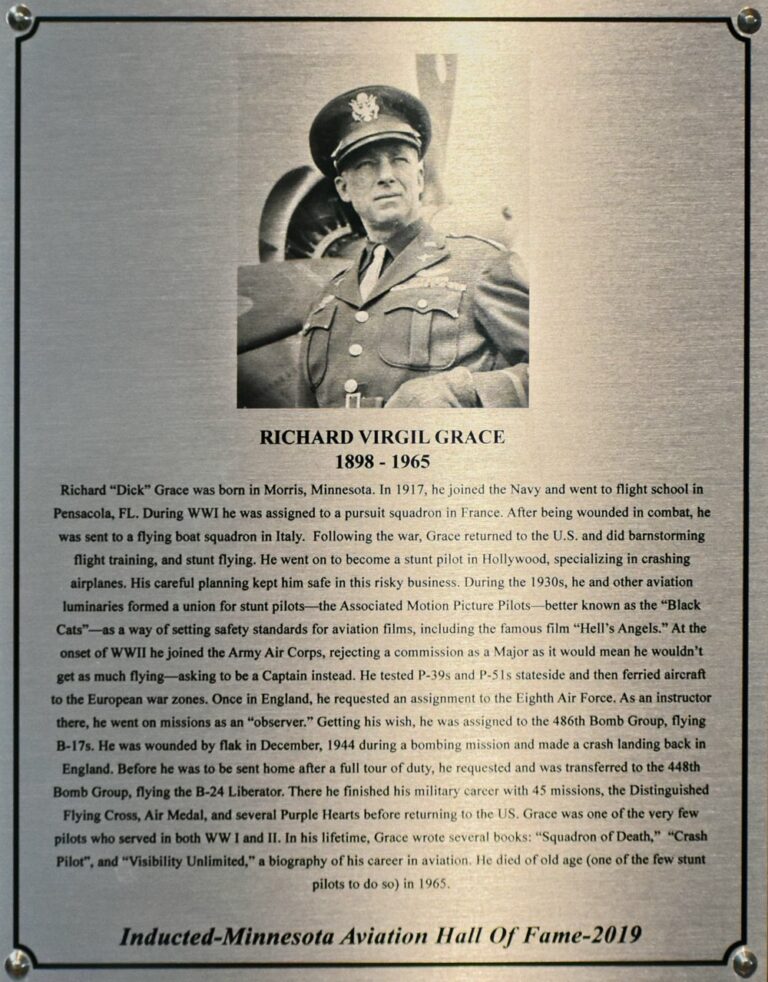 Richard “Dick” Grace was born in Morris, Minnesota. In 1917, he joined the U.S. Navy and went to flight school in Pensacola, FL. During WWII he was assigned to a pursuit squadron in France. After being wounded in combat, he was sent to a flying boat squadron in Italy. Following the war, Grace returned to the U.S. And barnstormed, gave flight training and did stunt flying. He went on to become a stunt pilot in Hollywood, specializing in crashing airplanes. His careful planning kept him safe in this risky business. During the 1930s, he and other aviation luminaries formed a union for stunt pilots – the Associated Motion Picture Pilots, better known as the “Black Cats” - as a way of setting safety standards for aviation films, including the famous “Hell's Angels.” At the onset of WWII he joined the Army Air Corps, rejecting a commission as a Major, as it meant he wouldn't be doing much flying, and asked to be a Captain instead. He tested P-39s and P-51s stateside and ferried aircraft to the European war zones. Once in England, he requested assignment to the Eighth Air Force. As an instructor there, he went on missions as an “observer.” He was assigned to the 486th Bomb Group, flying B-17s and was wounded by flak in December, 1944 during a bombing mission making a crash landing back in England. Before he was to be sent home after a full tour of duty, he requested and was transferred to the 448th Bomb Group, flying the B-24 Liberator. There he finished his military career with 45 missions, the Distinguished Flying Cross, Air Medal, and several Purple Hearts before returning to the U.S. Grace was one of the very few pilots who served in both WWI and WWII, in both the Navy and Air Corps. In his lifetime, Grace wrote several books: Squadron of Death; Crash Pilot; and Visibility Unlimited, a biography of his career in aviation. He died of old age in 1965.