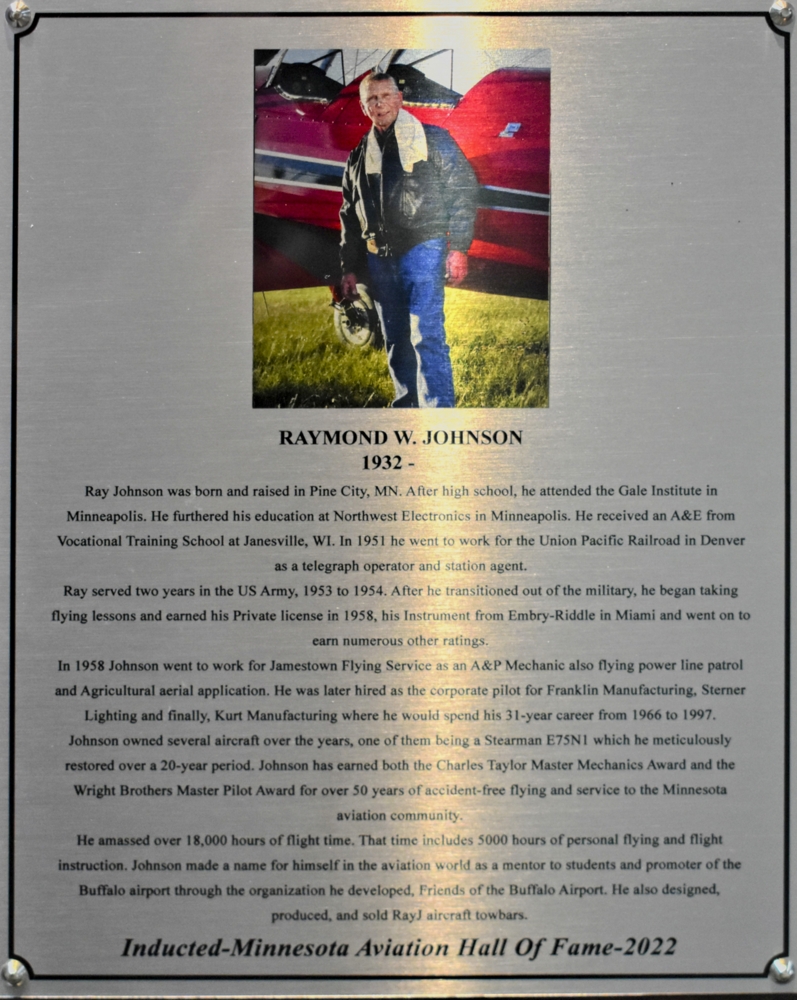 Johnson was born and raised in Pine City, Minnesota. After graduating high school he attended the Gale Institute in Minneapolis, where he learned telegraphy and railroad communications. He furthered his education at Northwest Electronics in Minneapolis, receiving his Second-Class FCC license. He received an A&E from Vocational Training School at Janesville, WI. In 1951 he went to work for the Union Pacific Railroad in Denver as a telegraph operator and station agent.

Serving two years in the US Army, 1953 and 1954, he had additional training in Radio Operator’s classes learning Morse Code. After he transitioned out of the military, he began taking flying lessons and earned his Private license in 1958, his Instrument from Embry-Riddle in Miami and went on to earn numerous other ratings.

In 1958 Johnson went to work for Jamestown Flying Service as an A&P Mechanic and flew power line patrol and crop spraying. His Commercial and Instrument licenses opened the doors for him to take a corporate flying job with Franklin Manufacturing, Sterner Lighting and finally, Kurt Manufacturing where he would spend his 31-year career from 1966 to 1997 as a corporate pilot. The Kurt Manufacturing Company has worldwide connections and he made flights across the US and Canada. Johnson also made transatlantic flights for the company.

Johnson owned several aircraft over the years, beginning with an Aeronca Champ, a Ryan PT-22, two Cessna 152s, a Cessna 180 and a Stearman E75N1 which he meticulously restored over a 20-year period. He flew the Stearman to many local airshows, winning numerous awards. Johnson has earned both the Charles Taylor Master Mechanics Award and the Wright Brothers Master Pilot Award for over 50 years of accident-free flying and service to the Minnesota aviation community.

He has amassed over 18,000 hours of flight time. That time includes 5000 hours of personal flying and flight instruction. He gave instructions at Crystal Airport, and then later moved to the Buffalo Airport. Johnson has made a name for himself in the aviation world as a mentor to students and promoter of the Buffalo airport through the organization he developed, Friends of the Buffalo Airport. He was instrumental in negotiating long-term renewable hangar leases with the city. He also designed, produced, and sold RayJ aircraft towbars.