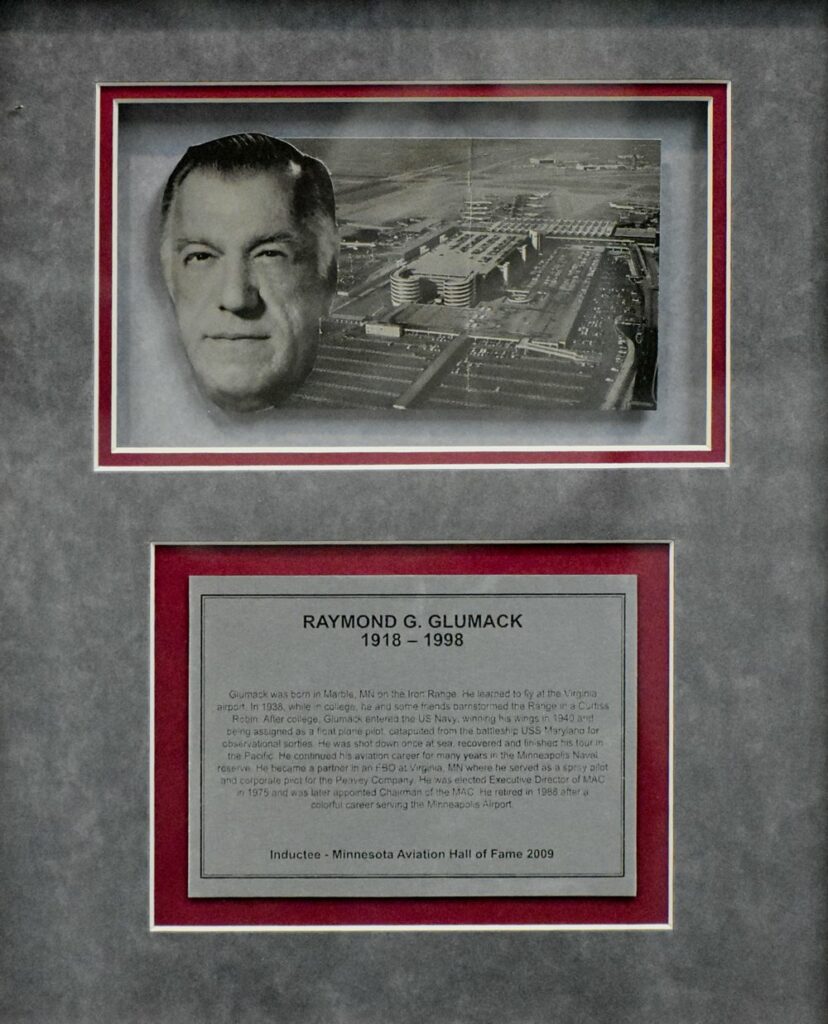 Ray Glumack was born in Marble, Minnesota on the Iron Range. He learned to fly at the old Virginia airport. In 1938, while in college, Ray and some friends barnstormed the Iron Range in a Curtiss Robin. After college, he entered the Naval Cadet program at Minneapolis, winning his wings in 1940. Assigned to the battleship USS Maryland, he narrowly avoided being injured on board during the bombing of Pearl Harbor. He served out the war in the Pacific on the Maryland, flying as an SOC seaplane pilot, catapulted from shipboard and recovered from the ocean. One of his planes was shot down and he spent time in a raft before being picked up by a destroyer. Glumack returned to Minneapolis and the Naval Reserve, where he finished his career, retiring as a Captain. Glumack became a partner in Northeast Airways, operating from the Virginia airport, serving as the operating officer of the corporation and spray pilot. In 1957, Glumack moved to the Twin Cities to work for the Peavey Corporation as a salesman for Aero Commander aircraft and helped negotiate the sale of Peavey to the Northern Pacific Railroad. He was elected Executive Director of MAC 1975, overseeing the metro airports. He helped save Traveler’s Aid by instigating a fund-raising tradition, helped conceive the Metropolitan Public Airport Foundation and the term “America’s North Coast Gateway” as the catch-phrase for MSP, and aided Northwest Airlines in obtaining CAB approval for direct international flights. When he stepped down as director, he was appointed Chairman of MAC by the Governor, finally retiring in 1988. His most proud accomplishment was to fend off the Minneapolis Metropolitan Council in its effort to takeover the MAC and its financial base.