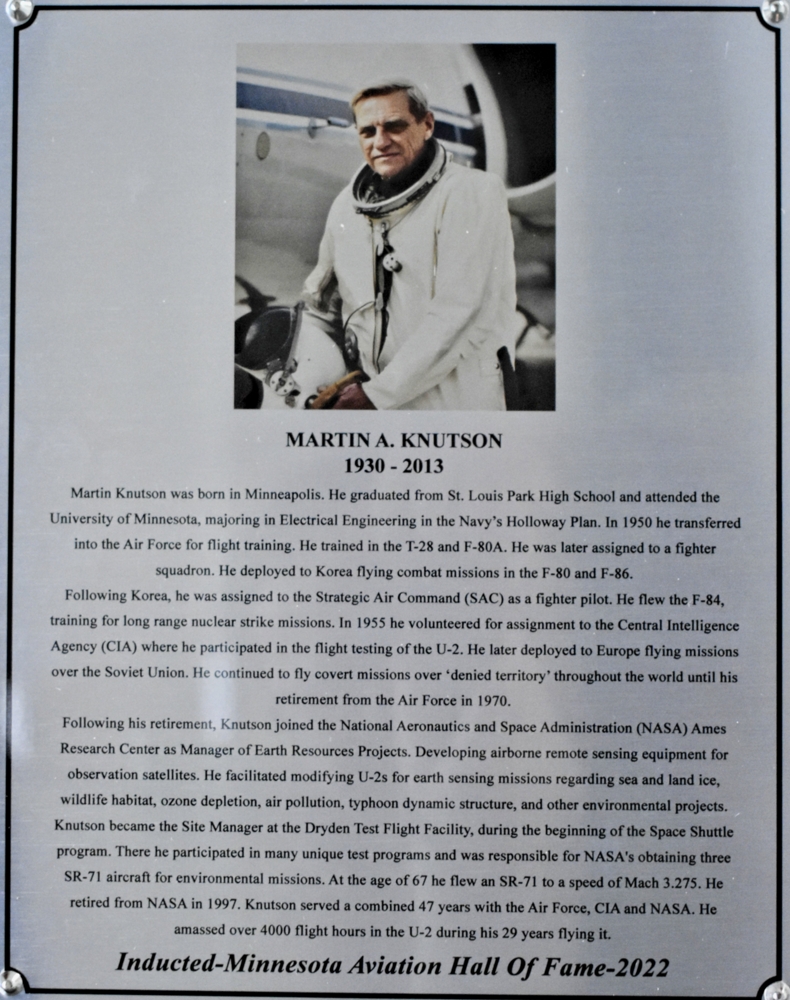 Martin Knutson was born in Minneapolis, MN. He graduated from St. Louis Park High School and attended the University of Minnesota working on a degree in Electrical Engineering in the Navy’s Holloway Plan. Which was a program that paid for college while a person was serving in the Navy. While working in the Pacific Fleet, during the Summer of 1949, he took his first airplane ride in the ball turret of a Grumman TBM Avenger.  It was after that flight he decided it would be better to be in the cockpit where the controls were.

In 1950 he transferred into the Air Force and went to flight training. He trained in the T-28 and F-80A. Upon his graduation, Knutson was assigned to a jet fighter squadron. He deployed to Korea where he flew combat missions in the F-80 and F-86.

Following Korea, he was assigned to the Strategic Air Command (SAC) as a fighter pilot stationed at Turner AFB, Georgia. He flew the Republic F-84, training for long range nuclear strike missions. In 1955 he volunteered for assignment to the Central Intelligence Agency (CIA) where he participated in the flight testing of the U-2. The first ever aircraft designed for sustained high-level flight. He was then deployed to Europe and flew missions over the Soviet Union. He continued to fly covert missions over ‘denied territory’ throughout the world until his retirement from the Air Force in 1970.

Following his retirement, Knutson joined the National Aeronautics and Space Administration (NASA) Ames Research Center in California as Manager of Earth Resources Projects. There he helped develop airborne remote sensing equipment for observation satellites. He helped modify U-2s for earth sensing missions regarding sea and land ice, wildlife habitat, ozone depletion, air pollution, typhoon dynamic structure, and other environmental projects. Knutson moved on to become NASA Site Manager at the Dryden Test Flight Facility. This was during the beginning of the Space Shuttle program when most of the Shuttle landings were made at Edwards Air Force Base. At Dryden, he participated in many unique test programs and was responsible for NASA’s obtaining three SR-71 aircraft for environmental missions, after the Air Force had retired them. At the age of 67 he flew an SR-71 to a speed of Mach 3.275. He retired from NASA in 1997.

Knutson served a combined 47 years with the Air Force, CIA and NASA. He amassed over 4000 flight hours in the U-2 during his 29 years flying it.