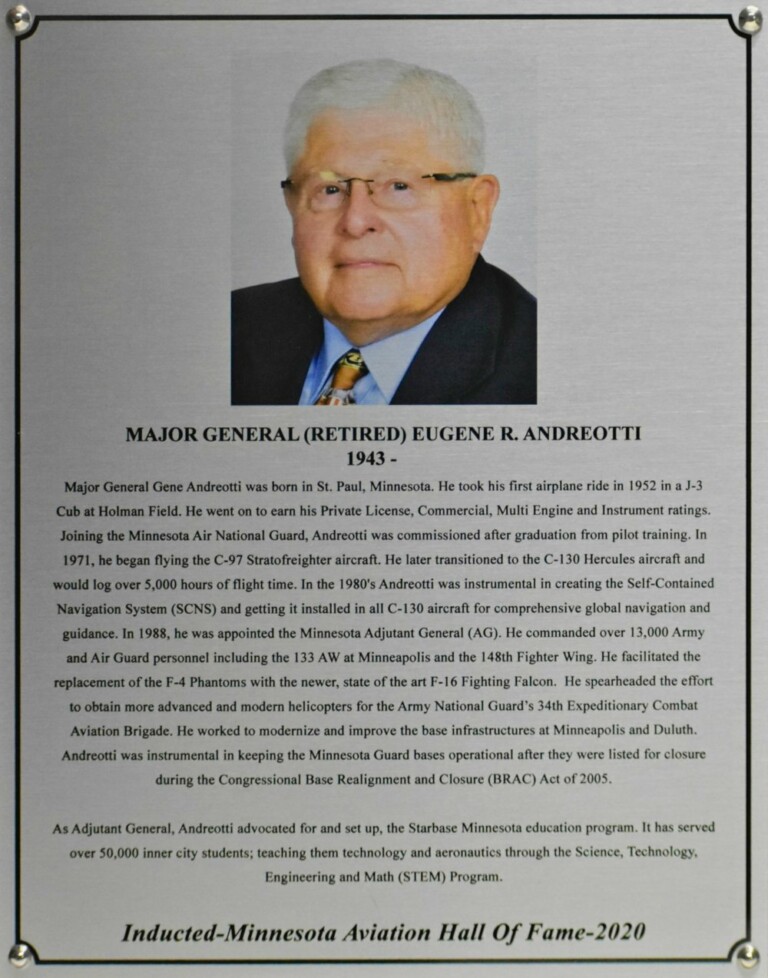 Major General Gene Andreotti was born in St. Paul, Minnesota. He took his first airplane ride in 1952 in a J-3 Cub at Holman Field. He went on to earn his Private License, Commercial, Multi Engine and Instrument ratings. Joining the Minnesota Air National Guard, Andreotti was commissioned after graduation from pilot training. In 1971, he began flying the C-97 Stratofreighter aircraft. He later transitioned to the C-130 Hercules aircraft and would log over 5,000 hours of flight time. In the 1980s Andreotti was instrumental in creating the Self-Contained Navigation System (SCNS) and getting it installed in all C-130 aircraft for comprehensive global navigation and guidance. In 1988, he was appointed the Minnesota Adjutant General (AG). He commanded over 13,000 Army and Air Guard personnel including the 133 AW at Minneapolis and the 148 th Fighter Wing. He facilitated the replacement of the F-4 Phantoms with the newer, state of the art F-16 Fighting Falcon. He spearheaded the effort to obtain more advanced and modern helicopters for the Army National Guard’s 34th Expeditionary Combat Aviation Brigade. He worked to modernize and improve the base infrastructures at Minneapolis and Duluth. Andreotti was instrumental in keeping the Minnesota Guard bases operational after they were listed for closure during the Congressional Base Realignment and Closure (BRAC) Act of 2005.

As Adjutant General, Andreotti advocated for and set up, the Starbase Minnesota education program. It has served over 50,000 inner city students; teaching them technology and aeronautics through the Science, Technology, Engineering and Math (STEM) Program.