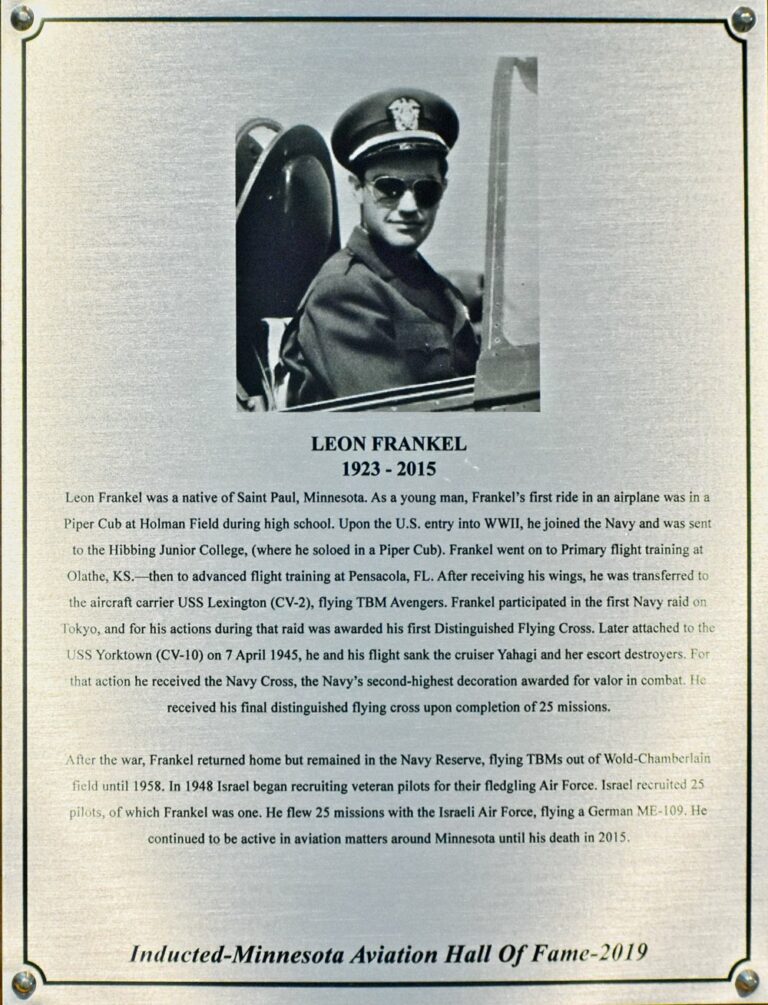 Leon Frankel was a native of St. Paul, Minnesota. As a young man, Frankel's first ride in an airplane was in a Piper Cub at Holman Field during high school. Upon the U.S. Entry into WWII, he joined the Navy and was sent to Hibbing Junior College where he soloed. Frankel went on to Primary flight training at Olathe, KS – then to Advanced flight training at Pensacola, FL. After receiving his wings, he was transferred to the aircraft carrier USS Lexington (CV-2), flying Avengers. Frankel participated in the first Navy raid on Tokyo, and for his actions during that raid was awarded the Distinguished Flying Cross. Later, attached to the USS Yorktown (CV-10) on April 7, 1945, he and his flight sank the Japanese cruiser Yahagi and her escort destroyers. For that action he received the Navy Cross, the Navy's second-highest decoration awarded for valor in combat. He received his final flying cross upon completion of 25 missions.

After the war, Frankel returned home but remained in the Navy Reserve, flying TBMs out of Wold-Chamberlain Field until 1958. In 1948 Israel began recruiting veteran pilots for their fledgling Air Force. Israel recruited 25 pilots of which Frankel was one. He flew 25 missions with the Israeli Air Force, flying a German Me-109. He continued to be active in aviation matters around Minnesota until his death in 2015.