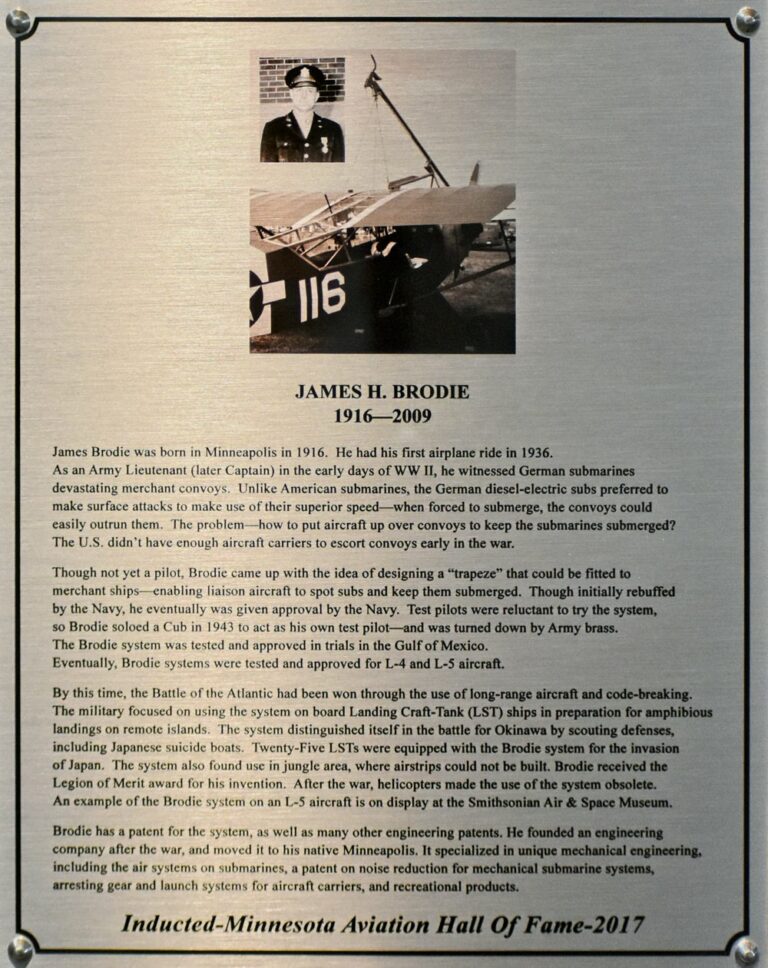 James Brodie was born in Minneapolis in 1916. He had his first airplane ride in 1936. As an Army Lieutenant (later Captain) in the early days of WW II, he witnessed German submarines devastating merchant convoys. Unlike American submarines, the German diesel-electric subs preferred to make surface attacks to make use of their superior speed—when forced to submerge, the convoys could easily outrun them. The problem—how to put aircraft up over convoys to keep the submarines submerged? The U.S. didn’t have enough aircraft carriers to escort convoys early in the war.

Though not yet a pilot, Brodie came up with the idea of designing a “trapeze” that could be fitted to merchant ships—enabling liaison aircraft to spot subs and keep them submerged. Though initially rebuffed by the Navy, he eventually was given approval by the Navy. Test pilots were reluctant to try the system, so Brodie soloed a Cub in 1943 to act as his own test pilot—and was turned down by Army brass. The Brodie system was tested and approved in trials in the Gulf of Mexico. Eventually, Brodie systems were tested and approved for L-4 and L-5 aircraft.

By this time, the Battle of the Atlantic had been won through the use of long-range aircraft and code-breaking. The military focused on using the system on board Landing Craft-Tank (LST) ships in preparation for amphibious landings on remote islands. The system distinguished itself in the battle for Okinawa by scouting defenses, including Japanese suicide boats. Twenty-Five LSTs were equipped with the Brodie system for the invasion of Japan. The system also found use in jungle area, where airstrips could not be built. Brodie received the Legion of Merit award for his invention. After the war, helicopters made the use of the system obsolete. An example of the Brodie system on an L-5 aircraft is on display at the Smithsonian Air & Space Museum.

Brodie has a patent for the system, as well as many other engineering patents. He founded an engineering company after the war, and moved it to his native Minneapolis. It specialized in unique mechanical engineering, including the air systems on submarines, a patent on noise reduction for mechanical submarine systems, arresting gear and launch systems for aircraft carriers, and recreational products.