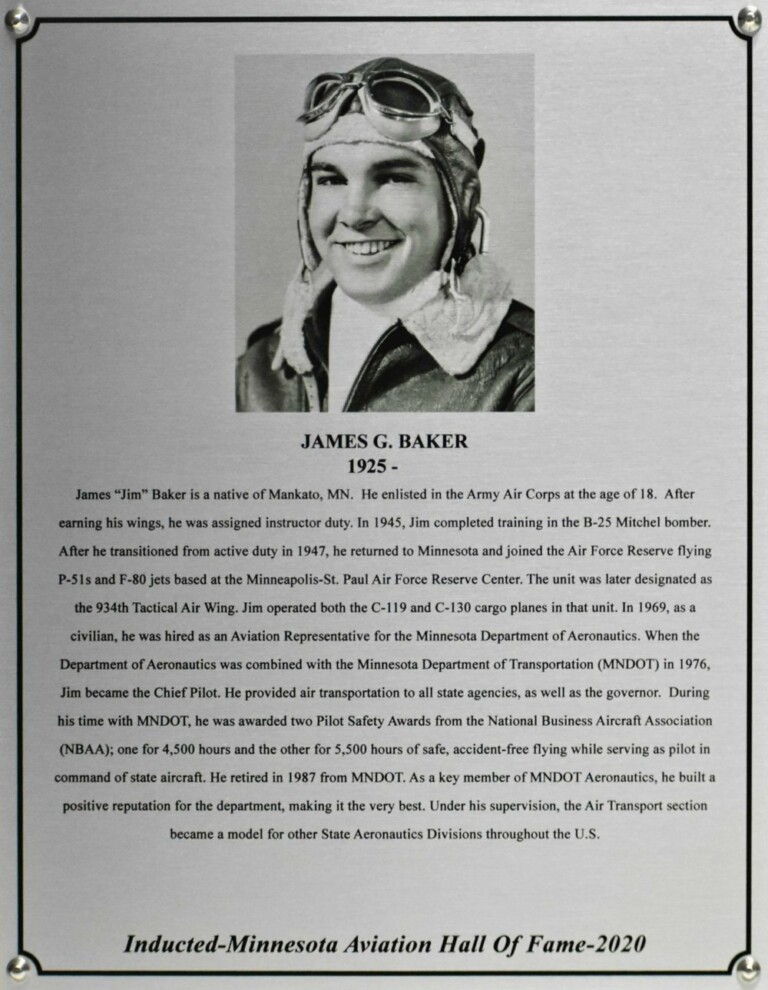 James “Jim” Baker is a native of Mankato, MN. He enlisted in the Army Air Corps at the age of 18. After earning his wings, he was assigned instructor duty. In 1945, Jim completed training in the B-25 Mitchel bomber. After he transitioned from active duty in 1947, he returned to Minnesota and joined the Air Force Reserve flying P-51s and F-80 jets based at the Minneapolis-St. Paul Air Force Reserve Center. The unit was later designated as the 934th Tactical Air Wing. Jim operated both the C-119 and C-130 cargo planes in that unit. In 1969, as a civilian, he was hired as an Aviation Representative for the Minnesota Department of Aeronautics. When the Department of Aeronautics was combined with the Minnesota Department of Transportation (MNDOT) in 1976, Jim became the Chief Pilot. He provided air transportation to all state agencies, as well as the governor. During his time with MNDOT, he was awarded two Pilot Safety Awards from the National Business Aircraft Association (NBAA); one for 4,500 hours and the other for 5,500 hours of safe, accident-free flying while serving as pilot in command of state aircraft. He retired in 1987 from MNDOT. As a key member of MNDOT Aeronautics, he built a positive reputation for the department, making it the very best. Under his supervision, the Air Transport section became a model for other State Aeronautics Divisions throughout the U.S.