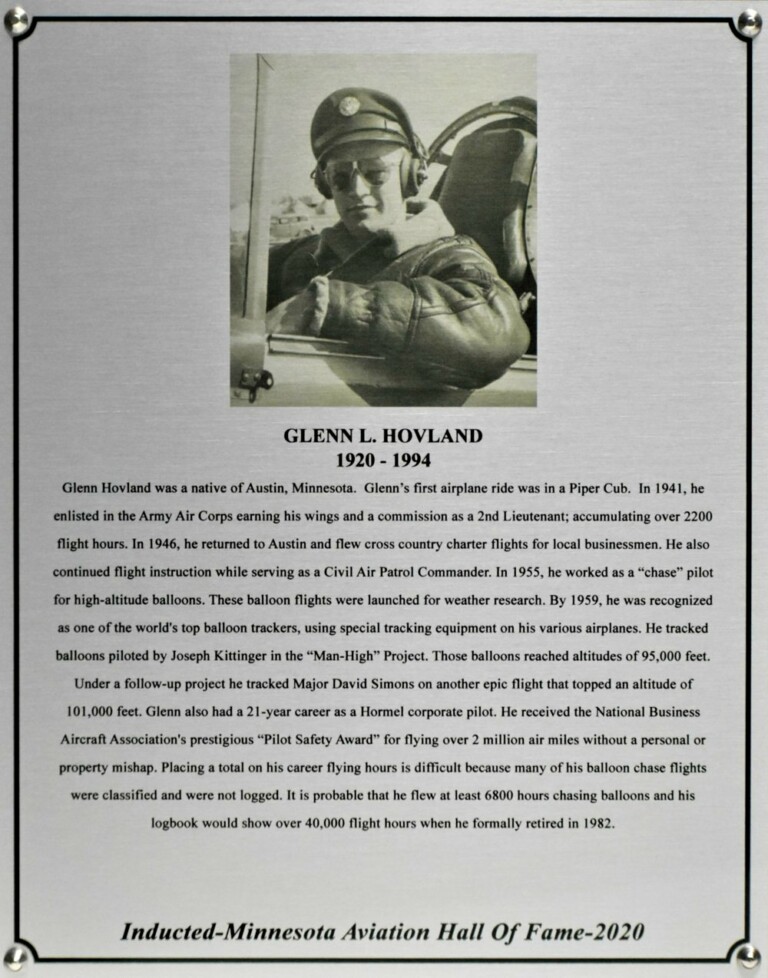 Glenn Hovland was a native of Austin, Minnesota. Glenn’s first airplane ride was in a Piper Cub. In 1941, he enlisted in the Army Air Corps earning his wings and a commission as a 2 nd Lieutenant; accumulating over 2200 flight hours. In 1946, he returned to Austin and flew cross country charter flights for local businessmen. He also continued flight instruction while serving as a Civil Air Patrol Commander. In 1955, he worked as a “chase” pilot for high-altitude balloons. These balloon flights were launched for weather research. By 1959, he was recognized as one of the world's top balloon trackers, using special tracking equipment on his various airplanes. He tracked balloons piloted by Joseph Kittinger in the “Man-High” Project. Those balloons reached altitudes of 95,000 feet. Under a follow-up project he tracked Major David Simons on another epic flight that topped an altitude of 101,000 feet. Glenn also had a 21-year career as a Hormel corporate pilot. He received the National Business Aircraft Association's prestigious “Pilot Safety Award” for flying over 2 million air miles without a personal or property mishap. Placing a total on his career flying hours is difficult because many of his balloon chase flights were classified and were not logged. It is probable that he flew at least 6800 hours chasing balloons and his logbook would show over 40,000 flight hours when he formally retired in 1982.