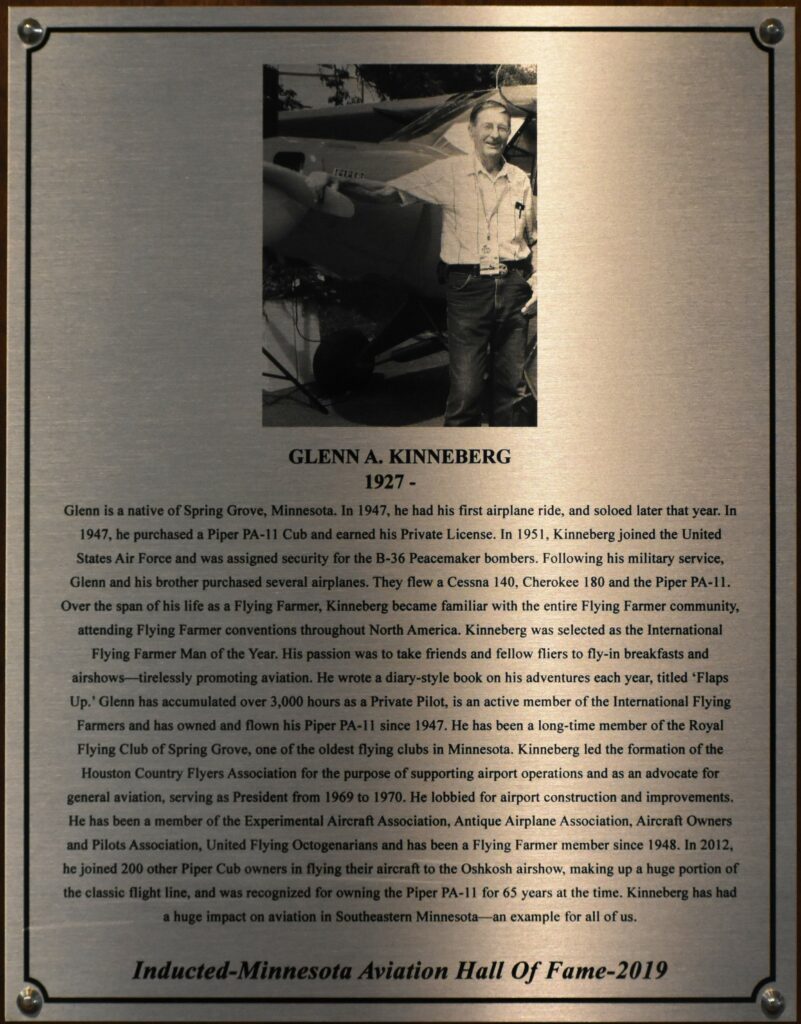 Glenn is a native of Spring Grove, Minnesota. In 1947, he had his first airplane ride and soloed later that year. The same year, he purchased a Piper PA-11 Cub and earned his Private license. In 1951, Kinneberg joined the U.S. Air Force and was assigned as security for the B-36 Peacemaker bombers. Following his military service, Glenn and his brother purchased and flew several airplanes, including a Cessna 140, Cherokee 180 and the Piper PA-11. Over the span of his life as a Flying Farmer, Kinneberg became familiar with the entire Flying Farmer community, attending their conventions throughout North America. Kinneberg was selected as the International Flying Farmer Man of the Year. His passion was to take friends and fellow fliers to fly-in breakfasts and airshows – tirelessly promoting aviation. He wrote a diary-style book on his adventures each year, title “Flaps Up.” Glenn accumulated over 3,000 hours as a private pilot, is an active member of the International Flying Farmers and has owned and flown his PA-11 since 1947. He has been a long-time member of the Royal Flying Club of Spring Grove, one of the oldest flying clubs in Minnesota. Kinneberg led the formation of the Houston County Flyers Association for the purpose of supporting airport operations and as an advocate for general aviation, serving as the President from 1969 to 1970. He lobbied for airport construction and improvements. He has been a member of the Experimental Aircraft Association (EAA), the Antique Airplane Association (AAA), Aircraft Owners and Pilots Association (AOPA), United Flying Octogenarians and has been a Flying Farmer member since 1948. In 2012, he joined 200 other Piper Cub owners in flying their Piper Cubs to the Oshkosh airshow, where he was recognized for owning his airplane for 65 years. He is an outstanding example of the pilots of Southeastern Minnesota.