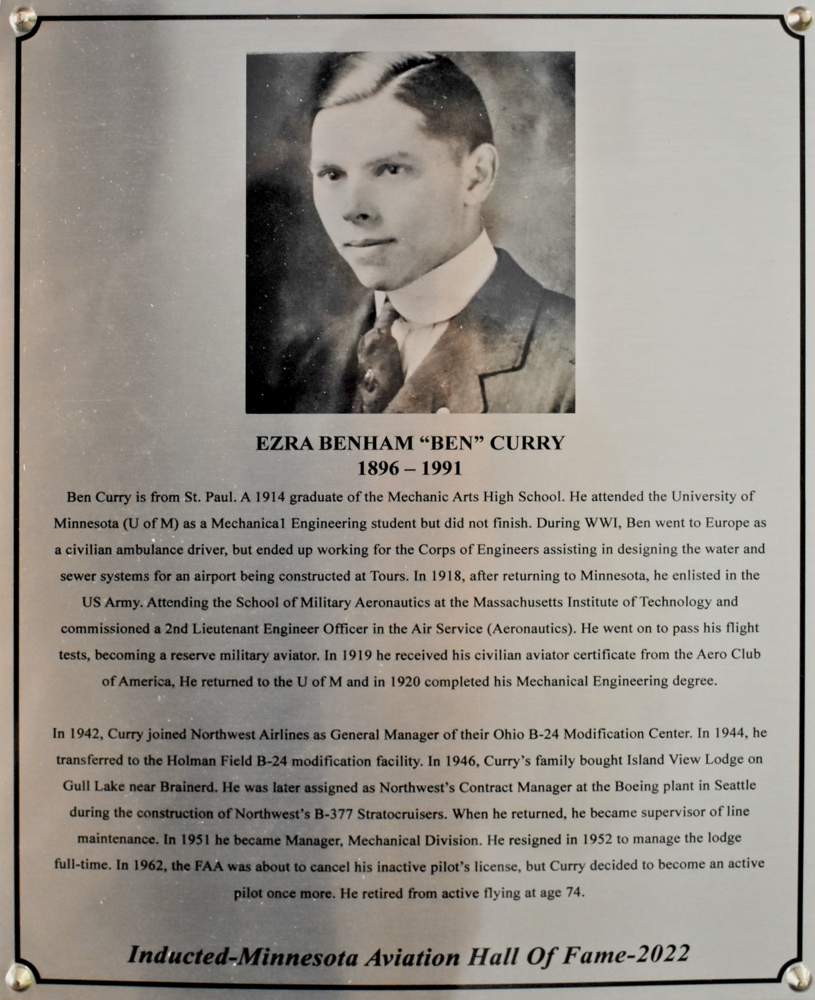 Ben Curry was born and raised in St. Paul, Minnesota. He is a 1914 graduate of the St. Paul Mechanic Arts High School. Curry went on to attend the University of Minnesota (U of M) as a Mechanica1 Engineering student. However, his college career was cut short by his father, who thought he needed more practical experience. He then became a Machinist Apprentice in the steam locomotive overhaul shops of the Northern Pacific railroad in St. Paul. This experience gave him the opportunity to learn to repair, disassemble and reassemble locomotives.

At the outbreak of WWI, there was an urgent need for battlefield ambulance drivers in France. A recruiting office for the Norton- Harjes Volunteer Motor Ambulance Corps was established at the U of M. There he joined as a civilian in 1917. The expectation was for the drivers to join the Army once in France. The ambulance service was disbanded several months after his arrival. He then went to work in Paris for the Corps of Engineers assisting in designing the water and sewer systems for the new airport being constructed at Tours. Curry left France in November of 1917, returning to St. Paul.

In January of 1918 he traveled to Omaha, Nebraska to enlist in the Army’s Signal Enlisted Reserve Corps. In March he received orders to the School of Military Aeronautics at the Massachusetts Institute of Technology, Cambridge, MA. Upon completion of his training, he was commissioned a 2nd Lieutenant Engineer Officer in the Air Service (Aeronautics) and was assigned to the First Training Wing at Mineola, Long Island, New York. In November of that year, he passed his flight test, soloing in a Jenny, becoming a reserve military aviator.

In December of 1919 he received his aviator certificate from the Aero Club of America, Federation Aeronautique Internationale. He returned to the U of M and in 1920 earned his Mechanical Engineering degree.

In 1942, Curry joined Northwest Airlines and was assigned as General Manager of Northwest’s Vandalia, Ohio B-24 Modification Center. In 1944, he was transferred to the Holman Field, St. Paul Modification Center. Under his supervision, B-24s were fitted with radar units, converted to tankers and reconnaissance aircraft. In 1946, Curry’s family bought Island View Lodge on Gull Lake near Brainerd and Curry went back to work for Northwest as Contract Manager for them at the Boeing plant in Seattle during the construction of Northwest’s B-377 Stratocruisers. When he returned, he became supervisor of line maintenance and in 1951 became Manager, Mechanical Division. He resigned in 1952 to manage the lodge full-time.

In 1962, the FAA was about to cancel his inactive pilot’s license, but Curry decided to become an active pilot once more. He joined the Crow Wing Flying Club at Brainerd, flying a Bonanza aircraft and flew frequently with his family. He retired from active flying at age 74. 56 years after his solo flight.