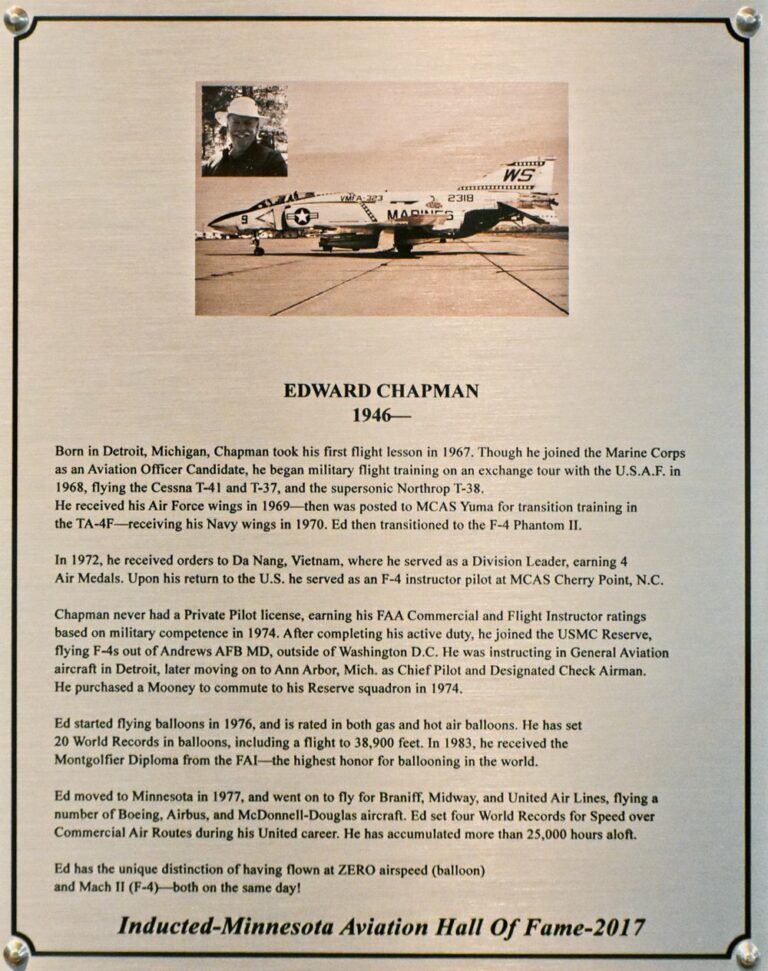 Ed Chapman was born in Detroit, Michigan, Chapman took his first flight lesson in 1967. Though he joined the Marine Corps as an Aviation Officer Candidate, he began military flight training on an exchange tour with the U.S.A.F. in 1968, flying the Cessna T-41 and T-37, and the supersonic Northrop T-38. He received his Air Force wings in 1969—then was posted to MCAS Yuma for transition training in the TA-4F—receiving his Navy wings in 1970. Ed then transitioned to the F-4 Phantom II.

In 1972, he received orders to Da Nang, Vietnam, where he served as a Division Leader, earning 4 Air Medals. Upon his return to the U.S. he served as an F-4 instructor pilot at MCAS Cherry Point, N.C.

Chapman never had a Private Pilot license, earning his FAA Commercial and Flight Instructor ratings based on military competence in 1974. After completing his active duty, he joined the USMC Reserve, flying F-4s out of Andrews AFB MD, outside of Washington D.C. He was instructing in General Aviation aircraft in Detroit, later moving on to Ann Arbor, Mich. as Chief Pilot and Designated Check Airman. He purchased a Mooney to commute to his Reserve squadron in 1974.

Ed started flying balloons in 1976, and is rated in both gas and hot air balloons. He has set 20 World Records in balloons, including a flight to 38,900 feet. In 1983, he received the Montgolfier Diploma from the FAI—the highest honor for ballooning in the world.

Ed moved to Minnesota in 1977, and went on to fly for Braniff, Midway, and United Air Lines, flying a number of Boeing, Airbus, and McDonnell-Douglas aircraft. Ed set four World Records for Speed over Commercial Air Routes during his United career. He has accumulated more than 25,000 hours aloft.

Ed has the unique distinction of having flown at ZERO airspeed (balloon) and Mach II (F-4)—both on the same day!