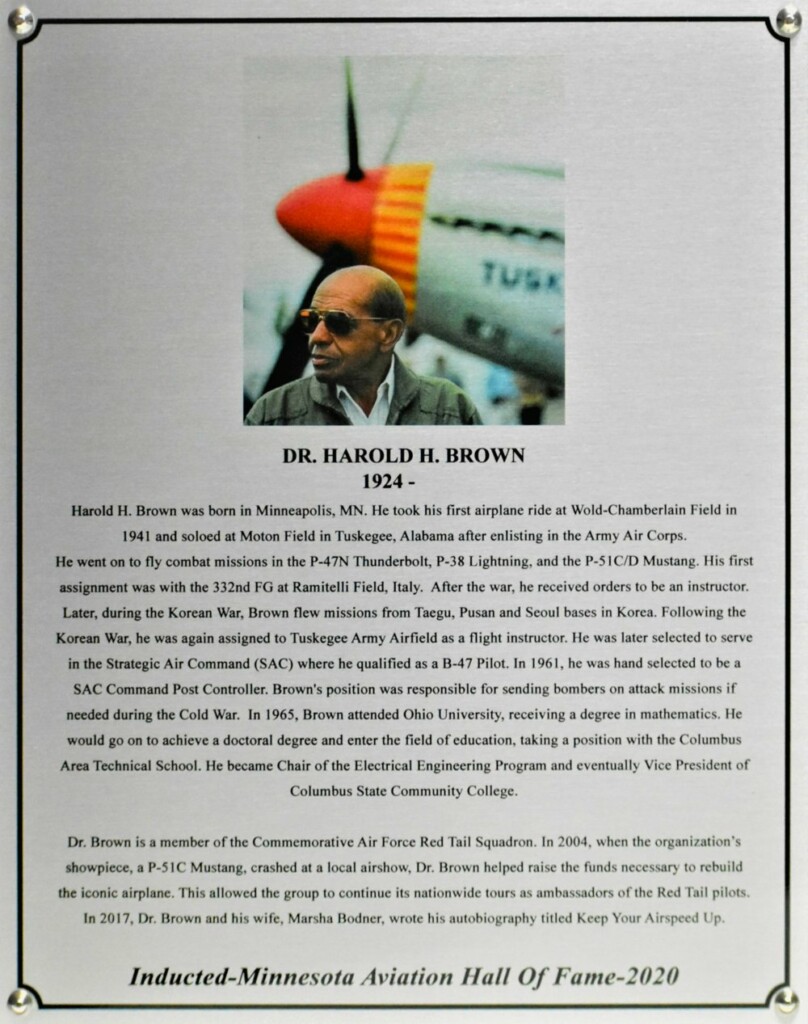 Harold H. Brown was born in Minneapolis, MN. He took his first airplane ride at Wold-Chamberlain Field in 1941 and soloed at Moton Field in Tuskegee, Alabama after enlisting in the Army Air Corps. He went on to fly combat missions in the P-47N Thunderbolt, P-38 Lightning, and the P-51C/D Mustang. His first assignment was with the 332nd FG at Ramitelli Field, Italy. After the war, he received orders to be an instructor. Later, during the Korean War, Brown flew missions from Taegu, Pusan and Seoul bases in Korea. Following the Korean War, he was again assigned to Tuskegee Army Airfield as a flight instructor. He was later selected to serve in the Strategic Air Command (SAC) where he qualified as a B-47 Pilot. In 1961, he was hand selected to be a SAC Command Post Controller. Brown’s position was responsible for sending bombers on attack missions if needed during the Cold War. In 1965, Brown attended Ohio University, receiving a degree in mathematics. He would go on to achieve a doctoral degree and enter the field of education, taking a position with the Columbus Area Technical School. He became Chair of the Electrical Engineering Program and eventually Vice President of Columbus State Community College.

Dr. Brown is a member of the Commemorative Air Force Red Tail Squadron. In 2004, when the organization’s showpiece, a P-51C Mustang, crashed at a local airshow, Dr. Brown helped raise the funds necessary to rebuild the iconic airplane. This allowed the group to continue its nationwide tours as ambassadors of the Red Tail pilots. In 2017, Dr. Brown and his wife, Marsha Bodner, wrote his autobiography titled Keep Your Airspeed Up.