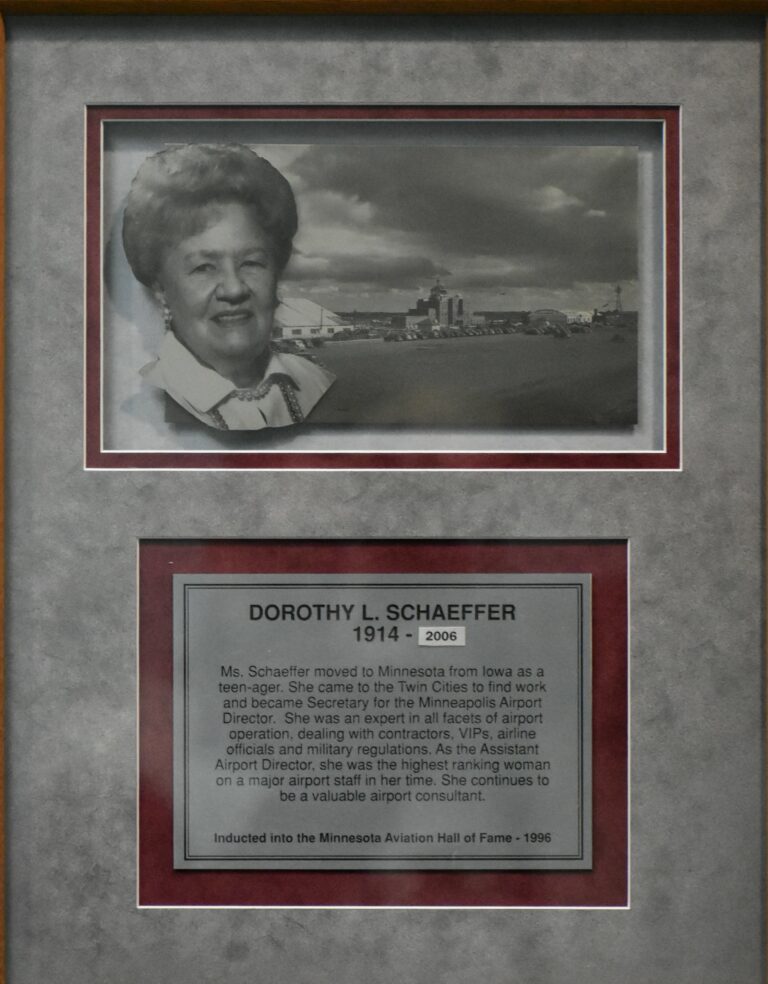 Schaeffer moved to Stanchfield, Minnesota in 1923. She came to the Twin Cities to find work to pay for her schooling and took a job as a governess. She started business school, but a fire at the family homestead required her to find additional work to help pay the family bills.

In 1940, she continued her business school courses and worked part-time at Lutheran Brotherhood. She paid off the debts to the family property and became the owner, selling to her brother Calvin in 1990. She learned the basics of blueprint reading and mechanical drawing and as a hobby, drew remodeling plans for her friend's projects.

In 1937, when her sister’s husband, a military pilot, offered her a ride in one of the squadron’s airplanes, she had her first flight at Minneapolis’ Wold-Chamberlain Airport (Now Twin Cities International;).  She had two sisters who worked at the Minneapolis airport terminal, and she would visit them. In 1942, the airport was administered by the Minneapolis Park Board and her sister's boss, Larry Hammond, the Airport Director asked them if they knew of anyone who would be able to work as a secretary, they suggested Dorothy. She began full-time work in March 1942. Hammond and his assistant, Roy Johnson, were happy to have the assistance as it was wartime, and many changes were occurring on the airport.

Schaeffer met daily with the various airline station managers and the control tower chief to keep them up to date on developments. She kept the payroll records for the Park Board employees. She met with military contractors, interpreting their blueprints, assisted the airlines, and interfaced with the media. She mediated problems between Northwest Airlines and Mid-Continent Airlines and the military officials. She helped draft the flight operations rules for the field required by the CAA (Civil Aeronautics Authority).

She worked with Governor Harold Stassen to help create the Metropolitan Airports Commission which took over airport operations from the Park Board in 1944. She did all these tasks while filling in as part-time restaurant waitress, popcorn maker, nursery attendant, janitor, first-aid person, and official VIP greeter. When the war was over, she assisted in the return of the field from the US Navy to civilian control. In 1974 she earned the rank of Assistant Airport Director/Administration, which made her the highest-ranking woman on any major airport staff.

Though she officially retired in 1974, she continued to serve the airport community as a board member of the Metropolitan Public Airport Foundation, a group that supports airport activities such as Traveler’s Aid and the Servicemen’s Center. Schaeffer also served on the board of the Charles A. & Anne Morrow Lindbergh Fund and the board of the Minnesota Aviation Hall of Fame. She organized an airport old-timers group and continued to meet with them to preserve the spirit and memory of the airport fraternity until the Spring of 2006. As part of her legacy, the “Dorothy Award” is given each year to an MSP employee who has given outstanding customer service to the public. The award carries a $1000 prize.

Dorothy Schaeffer was known to most Minnesota politicians, sports figures, and local dignitaries. Virtually the entire aviation community and visitors that passed through the airport became life-long friends because of Dorothy’s friendly and knowledgeable assistance.