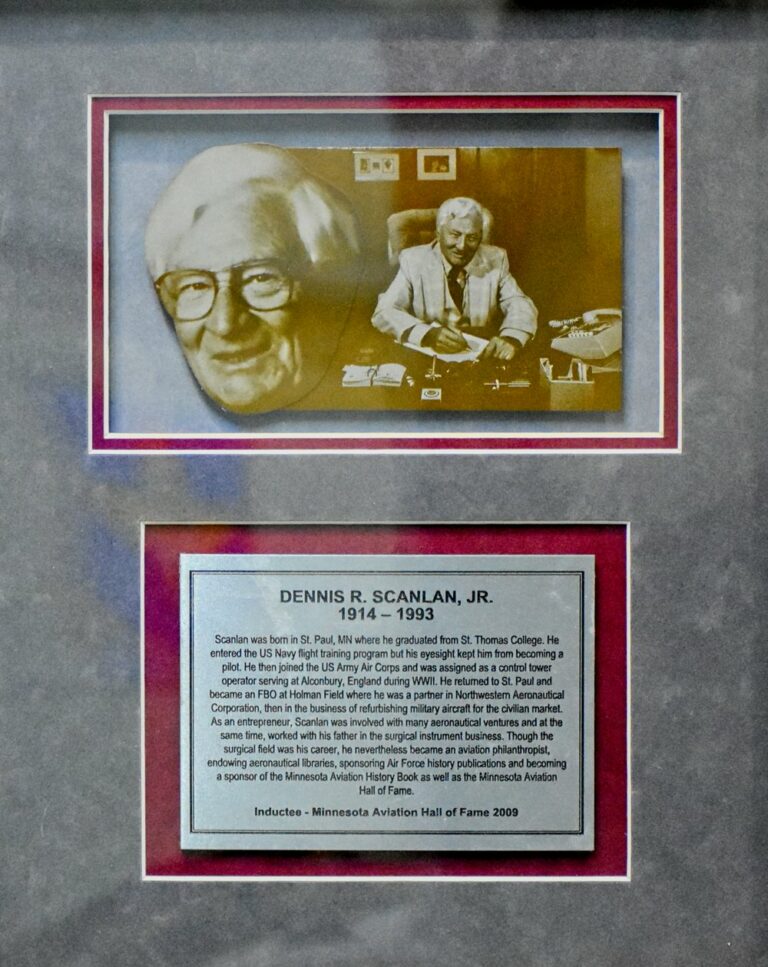 Dennis Scanlan, Jr. was born in St. Paul, Minnesota. He graduated from St. Thomas Academy prep school, then attended St. Thomas College and earned an Aeronautical Engineering Degree from the University of Minnesota in 1939. He joined the US Army Air Corps. He applied for flying control officer school in 1943, and was assigned as control tower operator at the 8th AF base at Alconbury, England. Scanlan returned to the US and joined the Minnesota Air Guard Reserve, finally being discharged in 1948. Having earned his Private license in 1941, Scanlan had joined the staff of Northwest Air Activities, an FBO at St. Paul’s Holman Field. After the war, Scanlan returned to become a partner in Northwestern Aeronautical Corp., then in the business of refurbishing military aircraft for civilian duty. In 1947, Scanlan opened Technical Air Services with Bob McManus operating an airshow and entering a car in the Indianapolis 500 in 1953. He had also worked as a salesman in his father’s surgical instrument manufacturing business before the war and after the war. He spent the remainder of his career manufacturing high quality surgical instruments as Scanlan, International, Inc. Scanlan never lost his enthusiasm for military aviation. He endowed St. Thomas College with a scholarship program and an aviation library; donated his own extensive aviation library to the University of Minnesota’s Aerospace Studies Department; sponsored the publishing of Air Force histories of Air Force Generals LeMay, Eaker and Spaatz and donated the funds to create a replica WWII English control tower at the Air Force Museum. Dennis Scanlan, Jr. was one of the seven investors that made the Minnesota Aviation History Book possible. He also played a major role in the Hall of Fame. His personal fund-raising sponsored the first induction banquet. He served on the Board of Directors until his death in 1993. His personal secretary, Lois Ring, was lent as Hall of Fame secretary for the first five years.