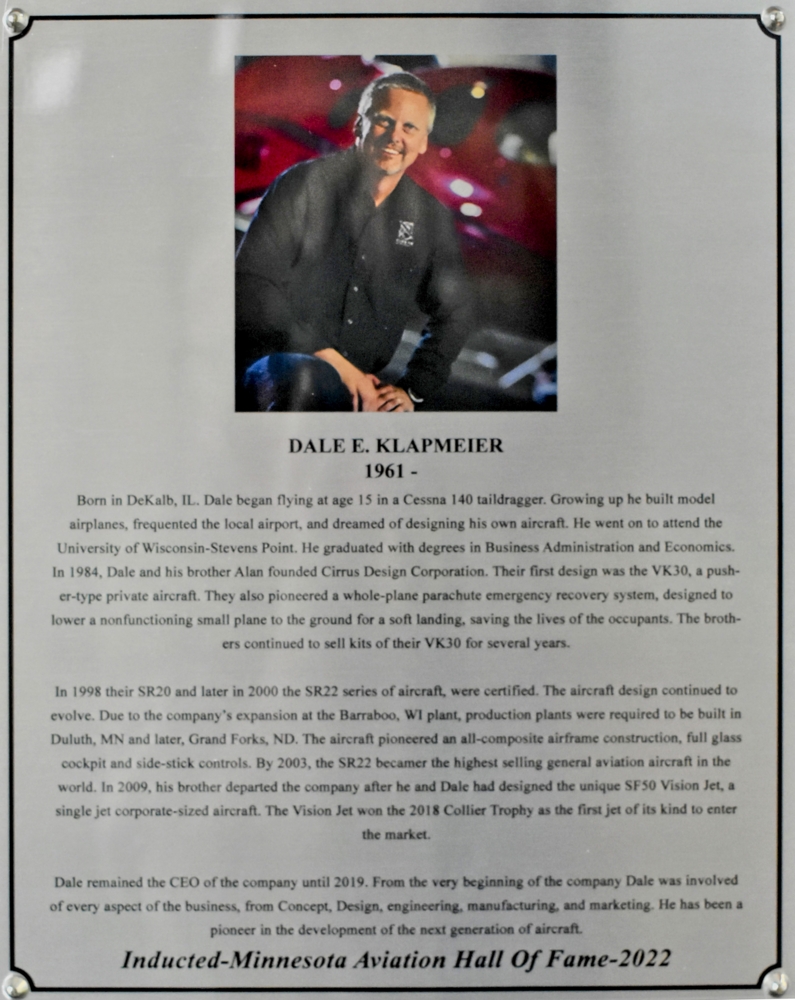 Born in DeKalb, IL. Dale graduated from DeKalb High School and went on to attend the University of Wisconsin-Stevens Point. He graduated with degrees in Business Administration and Economics. He began flying at age 15 in a Cessna 140 taildragger. Growing up he built model airplanes, frequented the local airport, and dreamed of designing his own aircraft. Dale, along with his brother Alan, rebuilt a wrecked Aeronca Champion aircraft and then went on to construct a Glasaire homebuilt.

In 1984, Dale and his brother founded Cirrus Design Corporation in the lower level of their parents’ rural dairy barn. The family’s first design was the VK30, a pusher-type private aircraft. Along with their aircraft design, the brothers pioneered a whole-plane parachute emergency recovery system, designed to lower a nonfunctioning small plane to the ground for a soft landing, saving the lives of the occupants. The brothers continued to sell kits of their VK30 for several years.

They continued to design and build aircraft. In 1998 their SR20 and later in 2000 the SR22 series of aircraft, were certified. The aircraft design continued to evolve, the number of manufacturing employees kept increasing, and the production plant continued to increase in size.  Growing so much that the plant in Barraboo, WI became too small. Plants were then built in Duluth, MN and later, Grand Forks, ND. The aircraft pioneered an all-composite airframe construction, full glass cockpit and side-stick controls. By 2003, the SR22 had become the highest selling general aviation aircraft in the world. In 2009, his brother departed the company after he and Dale had designed the unique SF50 Vision Jet, a single jet corporate-sized aircraft. The jet was certified in 2016 and put into production along with the SR series aircraft. The Vision Jet won the 2018 Collier Trophy as the first jet of its kind to enter the market.

In 2011, the company was sold. Dale remained the CEO of the company until 2019. From the very beginning of the company Dale was involved of every aspect of the business, from Concept, Design, engineering, manufacturing, and marketing. He has been a pioneer in the development of the next generation of aircraft. He continues to be a supporter of aviation in Minnesota.