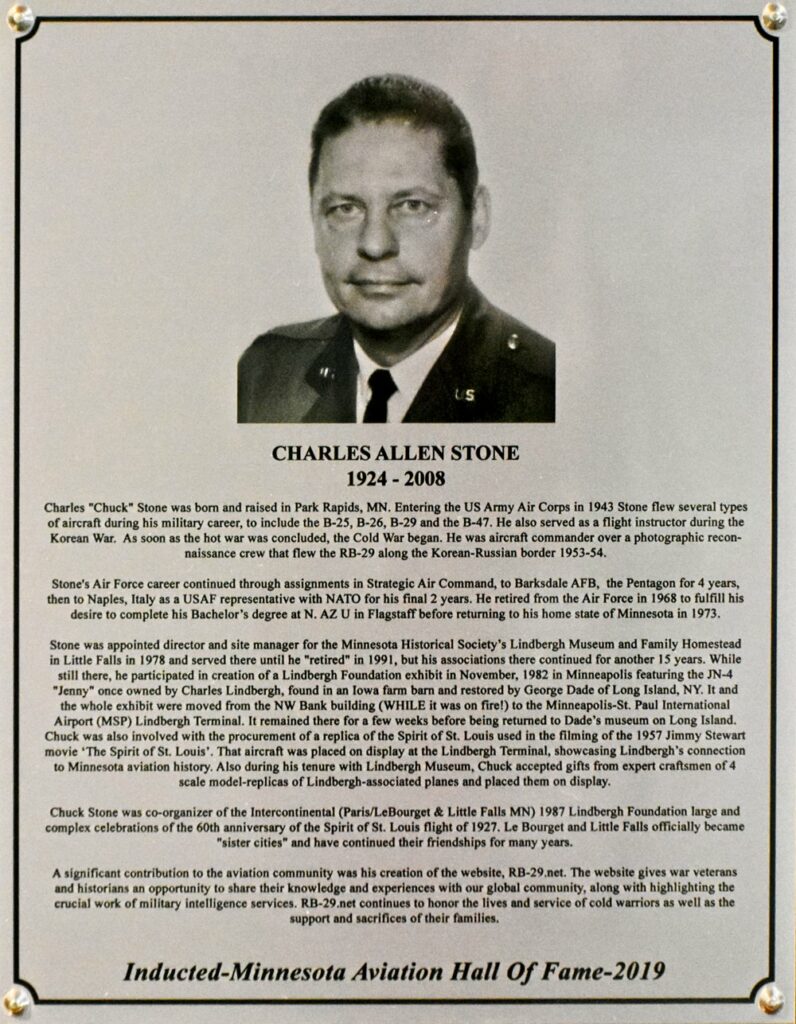 Charles “Chuck” Stone was born and raised in Park Rapids, Minnesota. Entering the U.S. Army Air Corps in 1943, Stone flew several types of aircraft during his military career, to include the B-25, B-26, B-29, and B-47. He also served as a flight instructor during the Korean War. As soon as the hot war was concluded, the Cold War began. He was aircraft commander of a photo reconnaissance crew that flew the RB-29 along the Korean/Russian border in 1953-1954.

Stone’s Air Force career continued through assignments with the Strategic Air Command at Barksdale AFB, the Pentagon for four years, then to Naples, Italy as a USAF representative to NATO for his final two years. He retired from the Air Force in 1968 to fulfill his desire to complete his Bachelors degree at Northern Arizona University in Flagstaff before returning to Minnesota.

Stone was appointed director and site manager for the Minnesota Historical Society’s Lindbergh Museum and Family Homestead in Little Falls, MN in 1978 and served there until he retired in 1991. His association there, however, continued for another fifteen years. While still there, he participated in creation of a Lindbergh Foundation exhibit in November 1982 in Minneapolis, featuring the JN-4 “Jenny” once owned by Lindbergh and found in an Iowa barn. It was restored in Long Island, NY. The exhibit hung in Minneapolis’ Northwestern National Bank atrium where it survived a fire that destroyed the rest of the building. The Jenny was subsequently put on display at MSP International Airport’s Lindbergh Terminal, showcasing Lindbergh’s connection to Minnesota.

Chuck Stone was co-organizer of the Intercontinental (Paris’ Le Bourget & Little Falls, MN) 1987 Lindbergh Foundation large celebration of the 60th anniversary of the Spirit of St. Louis flight to Le Bourget in 1927. Le Bourget and Little Falls became “sister-cities” and have continued their friendship over many years.

A significant contribution to the aviation community was Stone’s creation of the website RB-29.net. The website gives war veterans and historians an opportunity to share their knowledge and experiences with the global community, along with highlighting the crucial work of military intelligence services. RB-29.net continues to honor the lives and service of Cold War vets as well as the support their families.