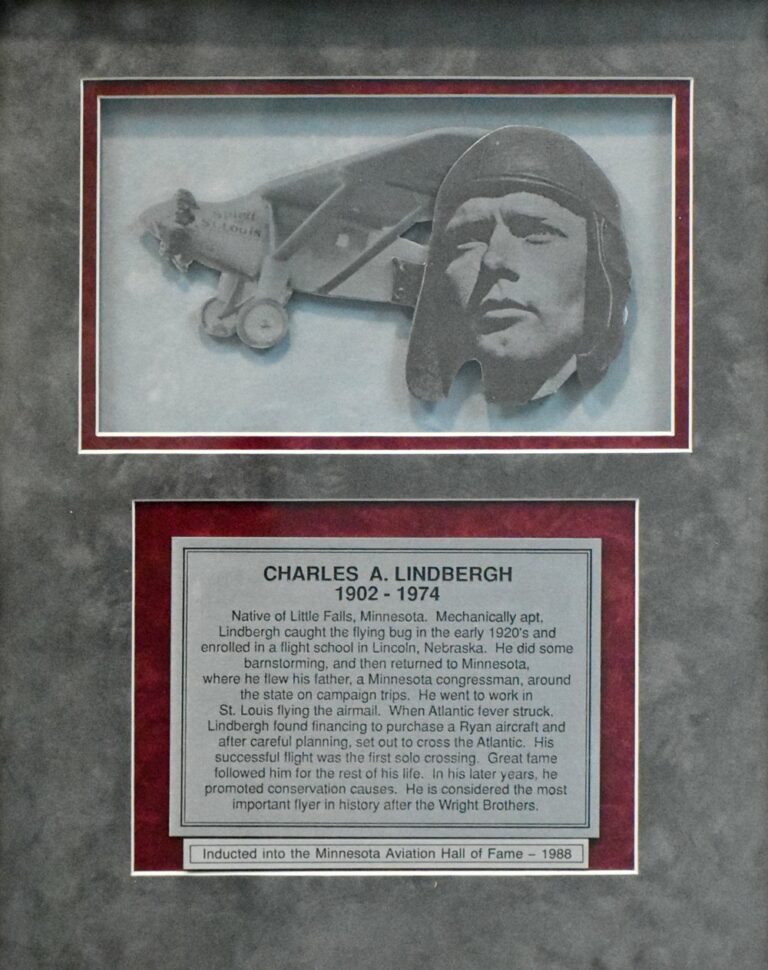 Lindbergh grew up on a farm in Little Falls, Minnesota. His father was a State Congressman from 1907 to 1917, representing the sixth district. After graduation from Little Falls High School in 1918, the younger Lindbergh spent two years in engineering studies at the University of Wisconsin, then succumbed to the urge to fly and enrolled in a flight school in Nebraska, becoming a wing-walker, parachute jumper, and barnstormer. He purchased a surplus Jenny and continued barnstorming. In 1924, he entered the Army flying school at San Antonio and became an airmail pilot after his training. Lindbergh convinced St. Louis business interests to fund his attempt at a transatlantic solo flight, and in 1927, made the crossing, immediately becoming the most important aviation figure in the world. In the latter part of 1927, he made an 82-city tour of the United States, inspiring thousands of young men and women to get into the flying. He met and married Anne Morrow and in 1932, their first child was kidnapped, amid sensational publicity. The Lindberghs retired to France, and while there, Lindbergh assisted with the development of an artificial heart. During the 1930s, Lindbergh, on behalf of the U. S. Government, inspected the status of aviation in European nations, reporting back on the strengths and weaknesses to U. S. intelligence. He went on record as favoring noninvolvement in a European conflict by the U. S. and faced severe criticism. After America entered the war, Lindbergh served as technical advisor to the government, and test pilot for United Aircraft. He flew fifty combat missions in the Pacific and shot down a Japanese aircraft. Eisenhower commissioned him a Brigadier General in the Air Force Reserve. He won the Pulitzer Prize for the book about his record flight, Spirit of St. Louis.