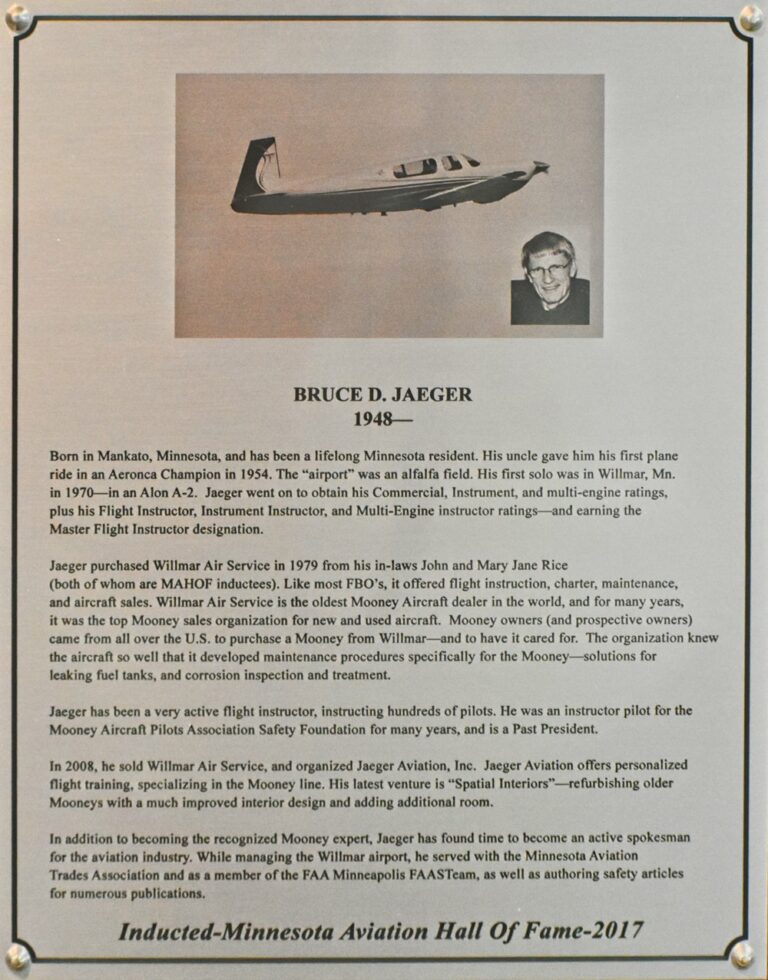 Bruce Jaeger was born in Mankato, Minnesota. His first plane ride was in 1954. He soloed in 1970 and received his private license in 1972. Other ratings followed. He has owned numerous aircraft. Early in his career, he worked as a physical education teacher and a sales representative for International Harvester. He was also a supply sergeant in the U.S. Army reserves from 1970 to 1976. Jaeger bought Willmar Air Service from his father-in-law, John Rice, who was a Mooney aircraft dealer. Jaeger was an instructor and charter pilot for the company and accumulated over 30 years as a fixed base operator. He was a member of the Minnesota Aviation Trades Association, Experimental Aircraft Association and held several positions in Mooney related associations. He is a frequent speaker at many aviation groups, and has authored numerous publications on a variety of aviation related topics. Jaeger sought to stop fuel leaks, a common Mooney aircraft problem. He created a separate company named Weep No More to clean the tanks to prevent buildup and leaking. The company is currently operating at Willmar. In 2008, Jaeger sold Willmar Air Service, and organized Jaeger Aviation, Inc. He continues to offer personalized flight training and recurrent training in the Mooney line. He has also started a new venture called “Spatial Interiors”, for the purpose of refurbishing Mooney interiors with new side panels and added space, all approved by Mooney Aircraft and the FAA.