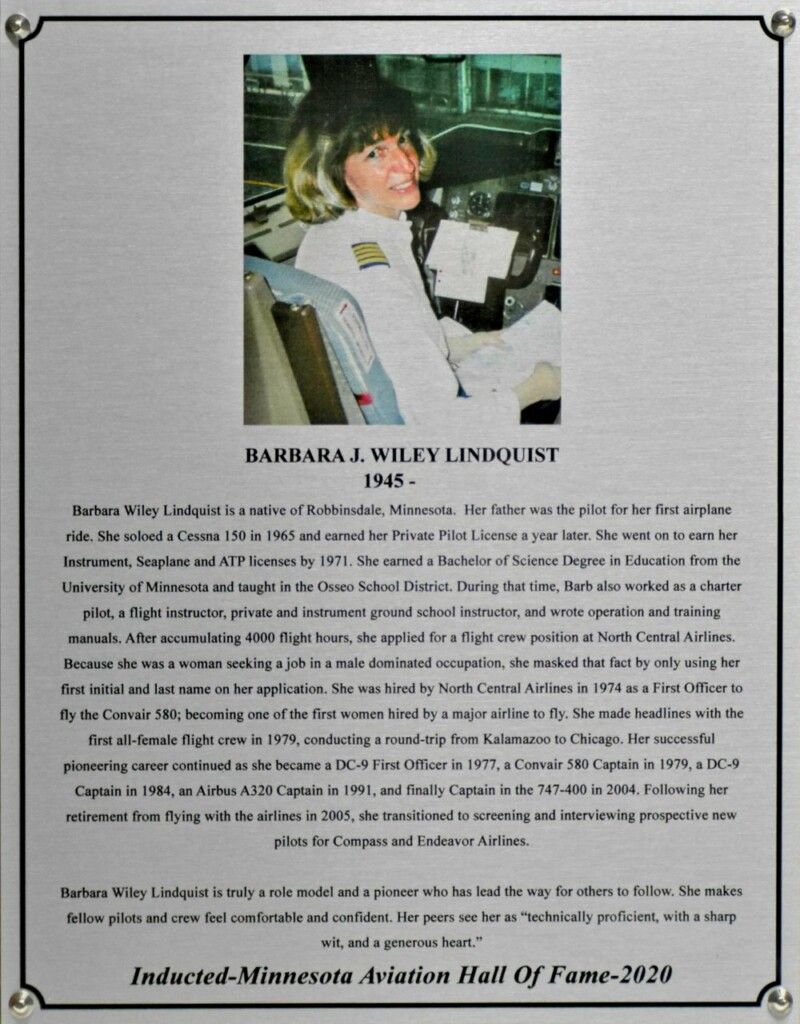 Barbara Wiley Lindquist is a native of Robbinsdale, Minnesota. Her father was the pilot for her first airplane ride. She soloed a Cessna 150 in 1965 and earned her Private Pilot License a year later. She went on to earn her Instrument, Seaplane and ATP licenses by 1971. She earned a Bachelor of Science Degree in Education from the University of Minnesota and taught in the Osseo School District. During that time, Barb also worked as a charter pilot, a flight instructor, private and instrument ground school instructor, and wrote operation and training manuals. After accumulating 4000 flight hours, she applied for a flight crew position at North Central Airlines. Because she was a woman seeking a job in a male dominated occupation, she masked that fact by only using her first initial and last name on her application. She was hired by North Central Airlines in 1974 as a First Officer to fly the Convair 580; becoming one of the first women hired by a major airline to fly. She made headlines with the first all- female flight crew in 1979, conducting a round-trip from Kalamazoo to Chicago. Her successful pioneering career continued as she became a DC-9 First Officer in 1977, a Convair 580 Captain in 1979, a DC-9 Captain in 1984, an Airbus A320 Captain in 1991, and finally Captain in the 747-400 in 2004. Following her retirement from flying with the airlines in 2005, she transitioned to screening and interviewing prospective new pilots for Compass and Endeavor Airlines.

Barbara Wiley Lindquist is truly a role model and a pioneer who has lead the way for others to follow. She makes fellow pilots and crew feel comfortable and confident. Her peers see her as “technically proficient, with a sharp wit, and a generous heart.”