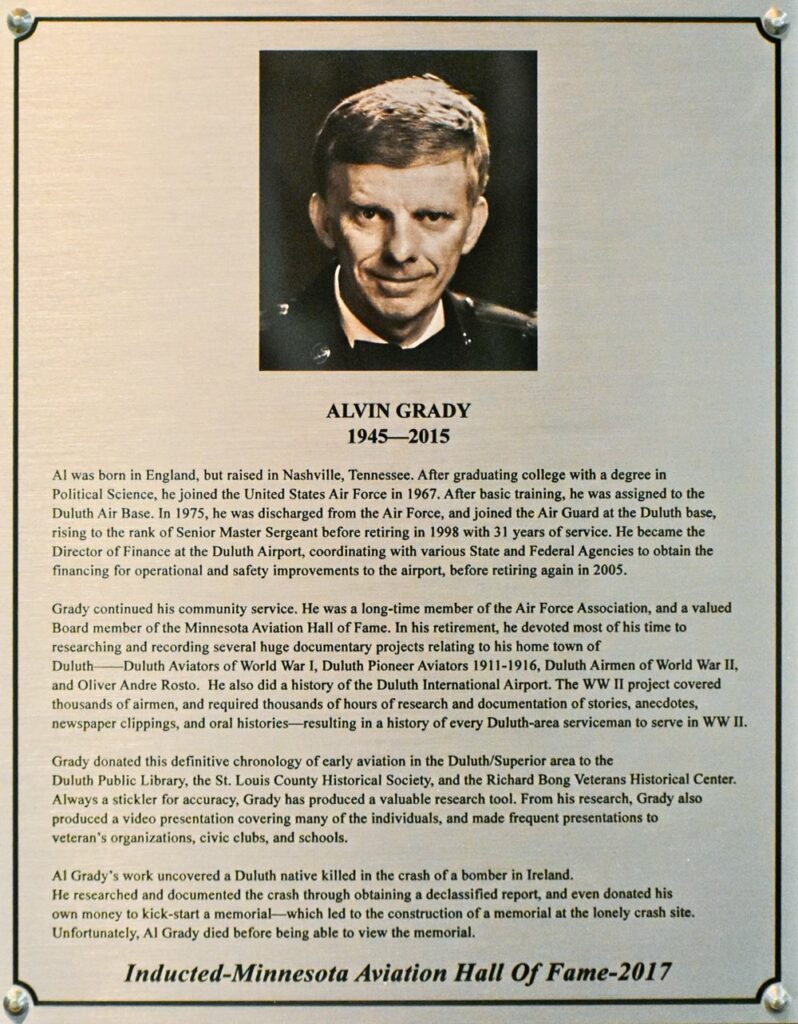 Al Grady was born in Ely, England. He came to Minnesota in 1969 and settled in Duluth. He joined the U.S. Air Force in 1967 and retired 31 years later after serving in the finance office. He joined the Duluth Air National Guard from which he retired in 1998 at the rank of Senior Master Sergeant. He was the budget analyst for the 148th FIS, and was Director of Finance for the Duluth Airport. Al spent countless hours researching Duluth’s aviation history, and gave numerous presentations to various groups. He was instrumental in enhancing and preserving the exhibition and collections programs of the Bong Museum in Superior, Wisconsin. His tireless research produced a three volume set of aviation data, research and history of aviators in Northern Minnesota. His period of interest covered 1911 through 1951. His work provides Duluth with the most complete and definitive chronology of early aviation, airports and flying events in the Duluth Superior area. On October 3, 1942, a U.S. B-17 lost its way in cloud cover crashed near Belfast, Ireland. Most of the crew members died, including Captain John Gibson from Duluth. Thanks largely to an Irish farmer on whose land the aircraft crashed and Al Grady, who had been researching Gibson, the crash might never have been recognized. Al went to Ireland, and the two men uncovered the history of the crew, arranged for a wreath to be placed on the site on October 3, 2012, 70 years after the crash. Al later sent money to the Irish community for a monument to be placed at the site. Al died without ever seeing the monument erected. Grady was of invaluable help to the Aviation Hall of Fame, taking on many of the projects necessary for the production of the banquet and the maintenance of the records of the inductees.