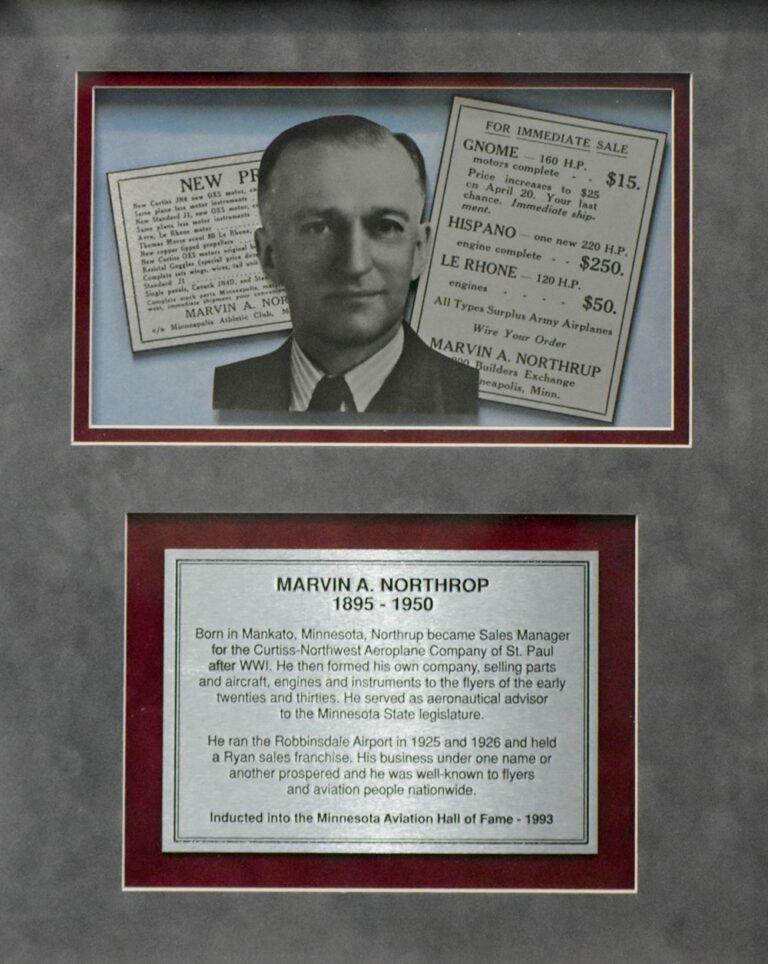 Born in Mankato. Northrop enlisted in the Army in 1918, and upon discharge, became Sales Manager for William Kidder at Curtiss-Northwest Airport. He barnstormed a little after dropping out of college at the University of Minnesota, then opened the Marvin A. Northrop Aeroplane Company, Inc. The Company supplied parts and assemblies of aircraft to homebuilders, rebuilders, and repair stations. Northrop produced the first aircraft parts catalog in the nation. He became well-known within the aviation community and spoke on behalf of aviation around the State. He was appointed to serve as the export advisor to the Minneapolis Park Board, and again as aeronautical advisor to the state legislature. Northrop ran the Robbinsdale Airport in 1925 and 1926. His company held the only regional Ryan aircraft sales franchise in the late 1920s. He went to Europe in 1928 to buy surplus aircraft parts there, having borrowed a small sum of money from the brokerage firm of Lane, Piper and Jaffrey. While Northrop was away, Piper went through with the incorporation of the Northrop Company, leaving Northrop, himself, out. Northrop returned, and brought suit against the brokerage firm to reclaim his business, or at least be paid for it, but was unsuccessful. Undaunted, he started over as the Marvin A. Northrop Airplane Company and continued with his former line of surplus parts sales. He also sold White motor trucks. After World War II, he maintained his business, selling engines, aircraft tires, wings, and even airport crash vehicles. Northrop was an educated man whose interests ranged from American history, to gardening, to opera, travel and archeology. He died in an accident at his warehouse on Washington Avenue, when he was crushed in the building's freight elevator. In a bizarre and still unexplained turn of fate, the coroner termed his death a suicide.