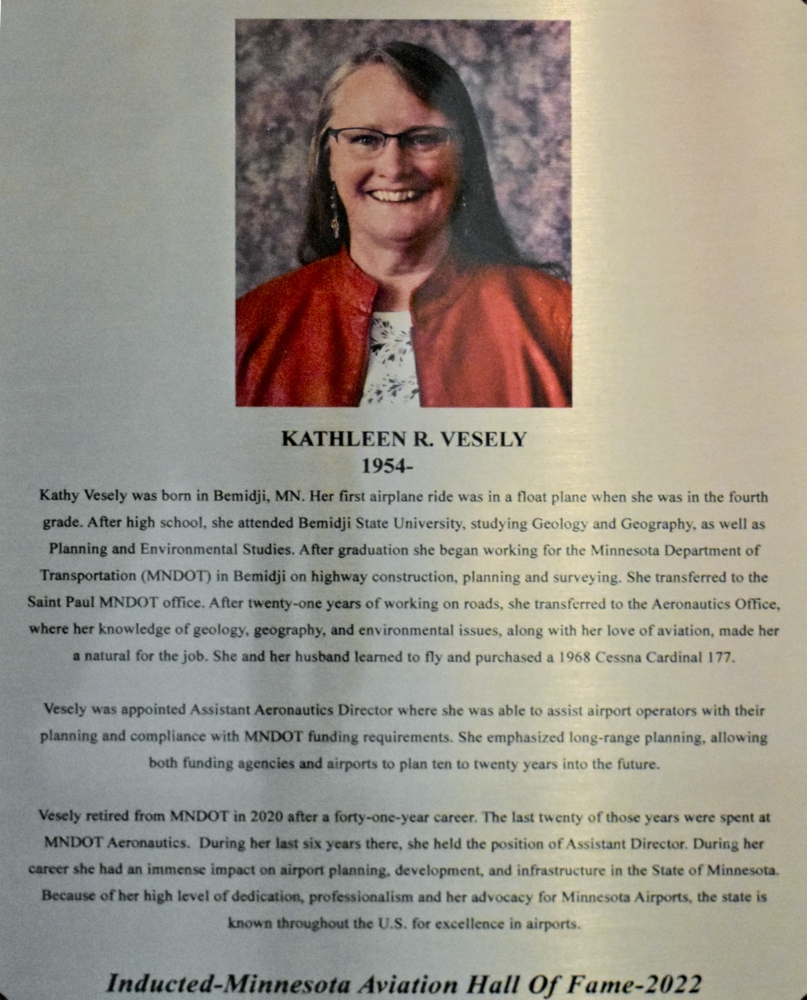 Kathy Vesely was born in Bemidji, Minnesota. Her first airplane ride was in a float plane when she was in the fourth grade.  It was from the city seaplane docks during the Summer Water Carnival on Lake Bemidji. After high school, she went on to attended Bemidji State University, studying Geology and Geography, as well as Planning and Environmental Studies. After graduation she began working for the Minnesota Department of Transportation (MNDOT) in Bemidji on highway construction, planning and surveying.

She eventually transferred to the Saint Paul MNDOT office. In 2000, after twenty-one years of working on roads, she transferred to the Aeronautics Office, where her knowledge of geology, geography, and environmental issues, along with her love of aviation, made her a natural for the job. During that time Vesely gifted her husband flight lessons for his 40th birthday. She also attended ground school with him. They later purchased a 1968 Cessna Cardinal 177 aircraft, restored it, and continued their flight training. They have flown and continue to fly their Cardinal all over the country.

When Vesely was appointed Assistant Aeronautics Director, she visited every airport in Minnesota to reach out to the operators to determine their future needs. She partnered with them to give the entire state airport community an opportunity to enhance their facilities. Because of her outreach program and the frequency in which she visited the airports, she became the face of state governance regarding Minnesota’s airports.

Through her position at MNDOT Aeronautics she was able to assist airport operators with their planning and compliance with MNDOT funding requirements. Her skills in coordinating the two elements, funding and airport requirements, were key in her ability to meet the needs of Minnesota airports. She emphasized long-range planning, allowing both funding agencies and airports to plan ten to twenty years into the future. The FAA was so impressed with her program that they allowed her to coordinate state with federal funding needs.

Vesely retired from MNDOT in 2020 after a forty-one-year career. The last twenty of those years were spent at MNDOT Aeronautics.  During her last six years there, she held the position of Assistant Director. During her career she had an immense impact on airport planning, development, and infrastructure in the State of Minnesota. Because of her high level of dedication, professionalism and her advocacy for Minnesota Airports, the state is known throughout the U.S. for excellence in airports.