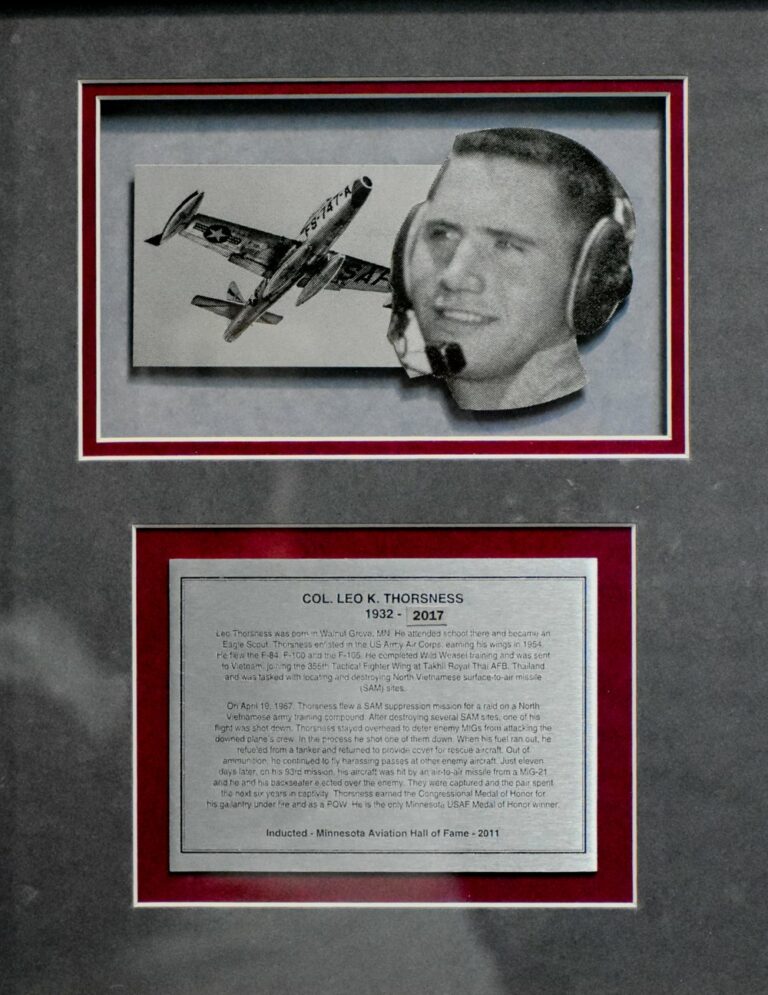 Leo Thorsness was born in Walnut Grove, MN. He attended school there and became an Eagle Scout. Thorsness enlisted in the US Army Air Corps, earning his wings in 1954. He flew the F-84, F-100 and the F-105. He completed Wild Weasel training and was sent to Vietnam, joining the 355th Tactical Fighter Wing at Takhli Royal Thai AFB, Thailand and was tasked with locating and destroying North Vietnamese surface-to-air missile (SAM) sites.

On April 19, 1967, Thorsness flew a SAM suppression mission for a raid on a North Vietnamese army training compound. After destroying several SAM sites, one of his flight was shot down. Thorsness stayed overhead to deter enemy MIGs from attacking the downed plane’s crew. In the process he shot one of them down. When his fuel ran out, he refueled from a tanker and returned to provide cover for rescue aircraft. Out of ammunition, he continued to fly harassing passes at other enemy aircraft. Just eleven days later, on his 93rd mission, his aircraft was hit by an air-to-air missile from a MiG-21 and he and his backseater ejected over the enemy. They were captured and the pair spent the next six years in captivity. Thorsness earned the Congressional Medal of Honor for his gallantry under fire and as a POW. He is the only Minnesota USAF Medal of Honor winner and one of five Air Force medal winners still living.